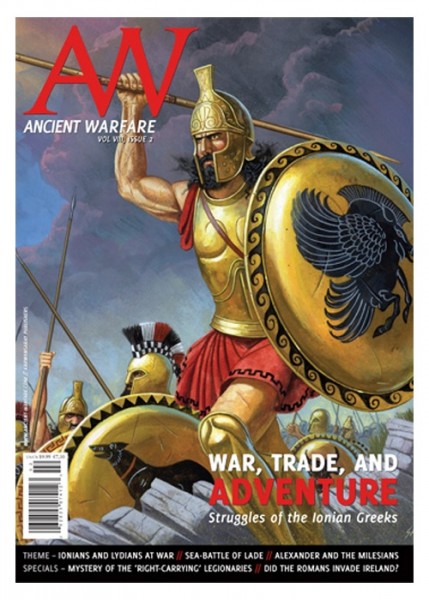 Theme: War, trade and adventure - struggles of the Ionian Greeks

The ancient Greeks originally divided themselves into four major tribes, namely the Dorians, Aeolians, Achaeans, and Ionians. Each of these tribes also spoke a distinct dialect (Doric, Aeolic, Ionic), apart from the Achaeans, who used a form of Doric. The Athenians believed themselves to be the original Ionians and spoke a variant dialect called Attic. The focus of this issue is on the Ionian Greeks. Outside of Attica, Ionians lived on the island of Euboea, on the Cyclades, and in colonies settled in the central part of the west coast of Asia Minor, as well as on the islands off its coast, such as Chios and Samos.

The Source: Cezary Kucewicz, 'Ionian Greeks in the Archaic period - Pirates, raiders, and soldiers of fortune'.

Archaic Ionia was at the very centre of the early Greek world. The Ionian Greeks were pioneers in trade and colonization, exploring every corner of the Mediterranean. Reconstructing early Ionian overseas ventures, however, is no easy task as the surviving historical sources are scarce. Careful piecing together of scraps of literary evidence - including poetry, inscriptions, and accounts of later historians - with the surviving archaeological record reveals an epic story of Ionian pirates, raiders and soldiers of fortune, who fought for almost every Near Eastern kingdom.

It was nearly seventy years before the Battle of Thermopylae that Ephesus, the last jewel of Greek independence in Ionia, was added to the crown of the Lydian Empire. When most people think of ancient Lydia, they think about its legendary wealth or as the birthplace of gold coinage emblazoned with symbolic lions. The lion was not only an artistic device depicted on coins: it characterized the ambition, power and ruthlessness of the Lydian rulers.

Theme: Vassilis Pergalias, 'Adventures of the Phocaeans - Ionians in the West'.

Braving the treacherous Aegean waves on their sturdy fifty-oared vessels, traveling beyond the straights of Messina, into the western reaches of the Mediterranean, Ionian merchants and settlers sailed from the city of Phocaea throughout the seventh and sixth centuries BC in order to establish trade posts and colonies along the shores of Corsica, Gaul and Iberia. Of all the Ionians of Asia Minor, the Phocaeans became renowned for their adept naval abilities that allowed them to gradually explore the shores stretching beyond the Pillars of Hercules. Their presence and success in this part of the world eventually provoked an aggressive response by the other significant actors of the region - the Carthaginians and Etruscans (known as Tyrrhenians to the Greeks) - rendering conflict inevitable.

The Reenactor: Spyros Bakas, 'A toxarchos from the Nereid Monument - Commander of archers'.

The toxarchos or toxarchis was a commander of - or officer in - a group of archers (toxotai). Toxarchoi are mentioned both by Thucydides, in the conflict between the Athenians and Aetolians, and by Arrian, in his description of the war between Macedonians and Thebans. On the Nereid Monument from Lycia, dated 390 BC, we see a unique representation of a heavily-armoured archer, who is probably the leader of the other archers shown in the scene. He is fighting at the side of a hoplite, reminiscent of the entaxis or parentaxis, in which men with missile weapons accompanied hoplites in battle.

By 494 BC, the Ionian Revolt was going badly for the Greeks. Persian emperor Darius I had dispatched a large expeditionary army augmented by a strong fleet, which had retaken numerous secessionist cities and islands. On the continent, Miletus remained the strongest of the free Greek cities. As the starting point and political centre of the rebellion launched in 499 BC, it was important both strategically and symbolically. The Persians determined to take the city, expecting the revolt to collapse with Miletus' fall. The Ionian Greeks agreed that the fight for Miletus would be the decisive battle of the Ionian Revolt.

In the wake of the Battle of Mycale in late summer 479 BC, and with the pontoon bridges of the Hellespont confirmed as neutralized, the Spartan king and commander of the allied fleet, Leotychides, set sail for home along with the Peloponnesian allies. While the Spartan thought the campaigning season's job done, the Greeks of Ionia, the Hellespont and Aeolia thought otherwise. These 'Greeks of Asia' had been subject to Persian rule since Cyrus' time and had, as a result of the Persian defeat, risen in revolt. Rejecting Leotychides' view that they should remove themselves to Greece they, along with the Athenians and the islanders under the Athenian general Xanthippus, spent the winter successfully besieging Sestus (Hdt. 9.104; Thuc. 1.89.2).

As a leader, Alexander ranks among the greatest of the ancient world, in both the opinions of modern and ancient minds. Of course, this is not to say that he did not make tactical errors during his career. Yet, by and large the decisions made and policies practiced were calculated with both the short and long term repercussions in mind. Two scenarios that reflect this are the capture of Miletus in 334 BC, and the massacre of the Branchidae in the summer of 329 BC.

Nuggets of military history gold can sometimes be unearthed in the most unlikely of places. In the New Testament, Acts 23.23 records that the tribune (Chilarchos), Claudius Lysias, summoned two centurions to form a bodyguard for the Apostle Paul to be made up of 200 soldiers, 70 cavalry and 200 dexiolaboi. This force was to escort Paul at the third hour of the night to Antipatris en route to the procurator Felix at Caesarea. From Antipatris the infantry returned to Jerusalem and only the cavalry accompanied Paul to Caesarea.

The Debate: Duncan B. Campbell, 'Did the Romans invade Ireland? - Roman Soldiers in Ireland'.

The idea of a Roman invasion of Ireland is one that has periodically intrigued scholars, ever since it was first suggested in the late nineteenth century. However, more than a century of research has failed to turn up the kinds of clues that elsewhere betray the presence of the Roman army. Nevertheless, the case for a Roman incursion continues to be championed in some quarters, if not as a certainty, then as a high probability. So what are the grounds for suggesting that the Romans invaded Ireland?