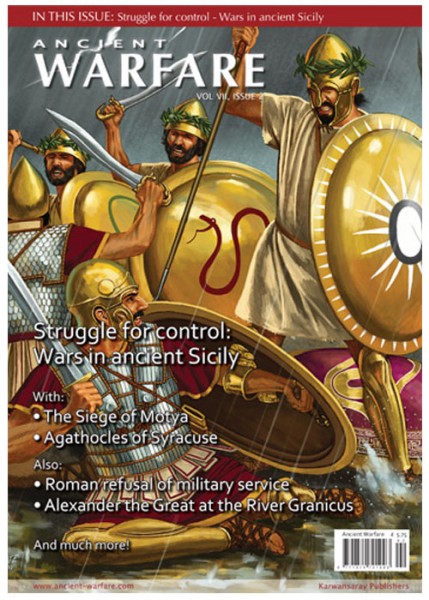 Created by the gods and land of the giants, Sicily was a wealthy but deadly prize that dangled in front of many ancient powers. The unfortunate island would be subjected to a seemingly endless series of wars fought by people from all over the ancient Mediterranean. For centuries, the Greeks and Carthaginians would bludgeon each other to the point of exhaustion over a desire to dominate the island. Heeding the siren's call, the power of Athens would be dashed against Sicily's rocks. Like a lover forced to choose between two suitors, Sicily would choose Rome over Carthage and thus accelerate thedemise of the latter.

Between 1907 and 1938, parts of a pedestal of a bronze statue of Poseidon were recovered on the Corinthian Isthmus. The inscription on the pedestal reads: "The Corinthians and Timoleon their general set the Greeks dwelling in Sicily free from Carthaginians and thus dedicate this thank-offering to the gods."

During the Peloponnesian War (431-404 BC), the Athenians did not only fight heavily against Spartans and Boeotians. Between 415 and 413 BC, they also took on a rather daring enterprise: a military expedition to the island of Sicily.

Theme: Nicholas Sekunda, 'A regiment of Cretan mercenary archers - In the service of Syracusan tyrants'.
Illustrated by Igor Dzis.

After their defeat by Hannibal at the battle of Trebbia in December 218 BC, the Romans appealed to Hiero II, tyrant of Syracuse, for help. According to Polybius (3.75.7), he sent them 500 Cretans and a thousand peltophoroi. The latter troops were typical Hellenistic 'peltasts', being armed with pike and a small bronze shield (pelte). They were able to fight either as light infantry on special operations, or in a phalanx formation. After the battle of Lake Trasimene, fought the following year, Hannibal is recorded as releasing the allies of Latin name (Livy 27.7.5); the Cretans were sent back to the Syracusan army. Hiero sent further reinforcements, consisting of a thousand archers and some slingers (Livy 22.37.8). He also sent supplies of corn to Rome after this battle, knowing that the Romans employed even foreigners to fight in those roles.

Theme: Filippo Donvito, 'Sow the wind and reap the whirlwind - Dionysius I's Siege of Motya, 397 BC'.
Illustrated by Johnny Shumate.

A traveler who had come to Syracuse at the dawn of the fourth century BC would have been much impressed by the city's appearance. Actually it did not look like the usual Greek polis, but seemed rather a sort of giant military factory under the open sky, full of barracks and fortified places echoing the metallic clink of blacksmiths producing thousands of suits of armour. The best engineers throughout the Mediterranean were inventing war machines that had never been seen before. All this was not just a way to show off. Syracuse’s tyrant Dionysius was planning to capture the most formidable Carthaginian stronghold in Sicily: Motya.

Agathocles (361-289 BC) became tyrant of Syracuse in 317 or 316 BC. Between 316 and 314 BC, he conquered numerous Greek towns in Eastern and Central Sicily, and forced others to become allies of Syracuse. Only the major cities of Gela, Acragas and Messana were able to resist by forming an alliance and by appealing to Carthage for support. In 314 BC, Hamilcar - the Carthaginian military governor of Western Sicily - brokered a 'peace settlement' recognizing Syracusan hegemony over the eastern two-thirds of Sicily. Hamilcar’s generosity is not surprising. He and Agathocles seem to have forged a personal pact in 317 BC with the Syracusan pledging to support Hamilcar against his political enemies in Africa. When Agathocles' Greek opponents complained directly to Carthage in 314, the Punic government indicted Hamilcar, who died before he could be recalled from Sicily.

In 2011, Museum Het Valkhof in Nijmegen, the Netherlands, purchased a Roman helmet from a private individual who had discovered it in a field. The helmet was of the so-called Coolus type and could be dated to the first three quarters of the first century AD. Although damaged, all parts were recovered. The dome and neck-guard were fashioned from a single sheet of bronze, while the conical crest knob was soldered and the peak reinforcement riveted on. The cheek-pieces were originally attached to the helmet via two hinges.

Special: Korneel Van Lommel, 'Refusal of military service in ancient Rome - "I would rather cut off my thumb"'.

In the span of just a few centuries, Rome grew from a small settlement to a large empire that extended from Scotland to Mauretania and from the Iberian Peninsula to the Caspian Sea. The Roman army was a crucial factor in establishing the empire. This may give the impression that the Romans were a warlike society, where every Roman was willing to put his life on the line. However, this ideal wrongly characterizes Roman civilization. Various sources refer to young men that did not want to join the army and instead deliberately mutilated themselves to be rejected from the military on medical grounds. In this article, these testimonies are set in the right time and context. I will elaborate on the refusal of military service, the young men’s motives for self-mutilation and the legal repercussions to this act of desertion.

The Debate: Duncan B. Campbell, 'What really happened at the River Granicus? - Alexander’s great cavalry battle'.
Illustrated by Pablo Outeiral and Julia Lillo.

In spring of 334 BC, Alexander the Great, then aged 21, crossed over into Asia Minor at the head of a 35,000-strong Macedonian army, to begin the conquest of the Persian empire. Barely 50 miles into his journey, he met the first Persian opposition at the River Granicus and overcame it convincingly. However, our main sources of information disagree on the course of the battle, and give only a vague idea of the terrain. So is it possible for us, over two millennia later, to trace exactly what happened at the River Granicus?