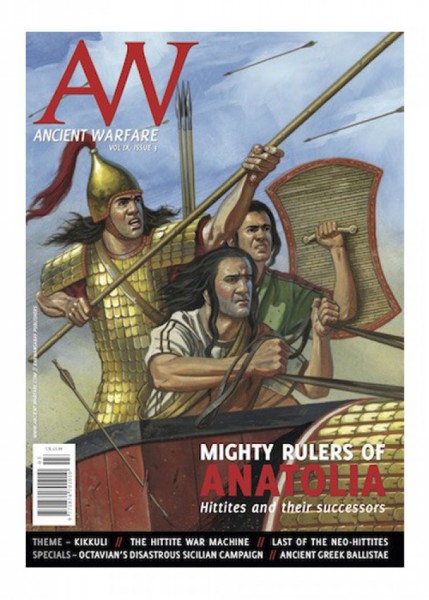 Theme: Arianna Sacco, "The Hittites and their successors: Historical introduction"

Anatolia juts out from Asia and forms an important gateway to Europe. Essentially a large peninsula, it borders Syria in the south, Mesopotamia in the east, and the Aegean in the west. Over the course of time, it has been the home of a remarkable number of different peoples, speaking a great variety of different languages. In the second millennium BC , a powerful kingdom arose whose leaders rubbed shoulders with mighty rulers from other parts of the Near East: the kingdom of the Hittites.

Organizers of parades, reviews, and ceremonial guards must deal with the tension between human frailty and the desire for security and order. The Hittites were no exception. Sometime in the middle of the second millennium BC , an anonymous official proclaimed how one of these conflicts was to be resolved (tr. Jared L. Miller): "If, however, anyone's bowels are troubling him, then one comrade tells another comrade, so that this, too, reaches the chief of the bodyguard (thus): 'May he go pee?' Then the chief of the bodyguard will say, 'He may go.' Whatever bodyguard goes to pee (without asking),though, His Majesty will take note of."

The Hittites were unsurpassed builders of fortifications. Their city defences, particularly those of Hattusa, demonstrate the perfect development of the Near-Eastern art of fortification in the Bronze Age. The Hittites' formidable defensive structures encompassed all Near-Eastern achievements of the time. Today they lie in ruins, but with the help of archaeology we can try to reconstruct them.

Sometime between the late fifteenth and fourteenth centuries BC , a Mitannian horse master called Kikkuli entered Hittite service to train horses for Hatti's chariotry. Pursuant to this task he wrote a training manual that set forth a seven-month regimen designed to prepare young horses both physically and psychologically for chariot combat. Preserved primarily on four clay tablets (plus a fragment of a fifth) and written mostly in the Hittite language, the 1,080 lines of cuneiform inscriptions that constitute this so-called 'Kikkuli Text' exhibit a genius for horse care and conditioning that anticipated the scientific methodologies of equine behaviourists of the modern era.

During its roughly 500 year span the Hittite Kingdom (Old and New) repeatedly rose to the rank of a regional superpower. Hittite armies sacked Babylon, destroyed the Mittani empire, occupied northern Syria and Lebanon, and repelled the Egyptian army. At its zenith the Hittite empire stretched from Western Anatolia to Upper Mesopotamia and the Northern Levant. The highly effective Hittite war machine made this possible.

Theme: Erich B. Anderson, "Rise and fall of minor kingdoms - Last of the Neo-Hittites"

When the last king, Suppiluliuma II , abandoned the royal city of Hattusa in 1185 BC , the Hittite Empire collapsed. Yet the Land of Hatti did not fade, but rather shifted and transformed into several independent kingdoms and city-states spread throughout southeastern Anatolia and northwestern Syria. With Carchemish, the former provincial capital of a Hittite viceroy, at the center of the region, these Neo-Hittite states prospered for several centuries with very little outside intervention. However by the ninth century BC , foreign enemies gradually forced the small kingdoms into submission, until the revitalized Assyrian Empire eventually eradicated their sovereignty entirely and turned the whole region into several imperial provinces.

Theme: Robert Holmes, "A Greek tradition of Anatolian invention - The armourers of Caria"

While the hoplite panoply is a hallmark of the ancient Greek solider, a Greek tradition dating to before the time of Herodotus credits the Carians, a non-Greek people of Anatolia with inventing several of the panoply's key features. Although a number of ancient sources attest to this tradition, the archaeological evidence is virtually nonexistent.

In 40 BC , Rome groaned under the strains of endless war, famine, and economic dislocation. Though the Civil War of Julius Caesar and the Senate had been over for some time, with the Caesarian forces achieving victory, there was still much strife and misery to be found across the empire. Octavian, as the heir of the nowdeified Caesar, had grasped the fallen dictator's mantle in his own bid for supreme power after his great-uncle's assassination in 44 BC . Mark Antony, Caesar's brave and trusted officer during his campaigns in Gaul and the Civil War, sought power as well.

The debate: Duncan B. Campbell, "What did the ballista really look like - Euthytones & Palintones"

Even after a century and a half of scholarly research, the names by which the ancients identified the different types of catapult still cause confusion. But no two terms have proved so intractable, and have generated so many theories and explanations, as 'euthytone' and 'palintone'. Ancient writers claimed that all two-armed catapults fell into one or other of these categories. There has always been consensus over the euthytone arrow-shooter's design, but over the years, scholars have disagreed over the design of the palintone, its stoneprojecting counterpart, known to the Romans as the ballista. So can we ever say precisely what the ancient ballista really looked like?

Despite not being very significant, historically speaking, Cleopatra has always been popular among modern audiences, a fact that would please her to no end. Recent years have seen the publication of new biographies on the Ptolemaic queen and the release of several historical fiction books, including a very well received young adult novel by Vicky Alvear Schecter about Cleopatra's daughter. Hollywood has also not been idle, with new feature films in development.