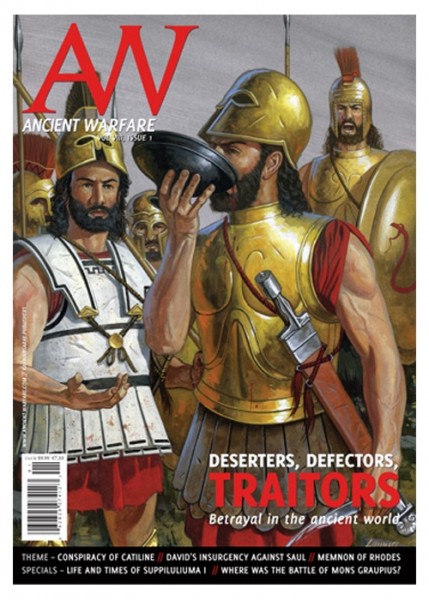 The ancient world had its fair share of brave and courageous men, who stayed the course despite profound adversity or who seemed to laugh in the face of death. However, our sources also include accounts of people who - out of fear, for personal gain, or some combination of these and other factors - decided to betray their friends, their country, or their principles.

The source: Mark McCaffery, 'How Cicero was heralded pater patriae - The Catiline Conspiracy'.

On 31 December 63 BC, Marcus Tullius Cicero declared from the rostra in the Forum Romanum that the state had attained its salvation by his efforts and his alone. He was prevented from pronouncing anything more than this customary oath by the tribune Quintus Metellus Nepos. Another of the tribunes, Marcus Porcius Cato Uticensis, later gave his approval to the actions taken by Cicero during the preceding year. In the process of giving such praise, Cato made reference to Cicero as pater patriae, 'father of the fatherland'.

Theme: Sidney E. Dean, 'David's insurgency against Saul - The man who would be king'.

The biblical character David is popularly known as a shepherd boy who became King Saul's military champion and, subsequently, as a king, who defeated the Philistines and captured Jerusalem. But this is only a partial picture. The prime source for information on David - the Old Testament's Book of Samuel - also describes how David fled the service of Saul, raised a private army, and waged insurgent warfare against his king. Later David entered the service of the Philistine king of Gath, one of the Jewish people's greatest enemies. While Samuel attempts to portray these actions as favourably as possible, modern Bible scholars, historians, and archaeologists have been examining David more closely. Increasingly an alternate image emerges: that of an ambitious, power-hungry officer who turned against his own people to further his personal ambitions.

One man has been denigrated throughout history as an example of the classical traitor to his country. The other man has been recognized throughout history as a patriot and a great prophet. Yet, the similarities in the positions of Jeremiah and Josephus vis-à-vis their countrymen's revolts against their respective imperial overlords are too striking to ignore. Both men were against these respective rebellions and though subsequent history has exonerated one of them, both men were called traitors and collaborators by their compatriots of the day for their positions of seeming to favour the enemy over their own country. But were they really traitors? Or did they have a larger purpose in mind?

The dual kingship of Sparta created certain tensions, none more infamous than the "bitter enmity" between Demaratus and Cleomenes I (Herodotus 6.64). Because Demaratus "won glory among the Lacedaemonians time and time again by his actions and his intelligence" (Hdt. 6.70), some apologists have sought to excuse Demaratus' eventual flight to Persia. But is there evidence for a pro-Persian stance by this Spartan king?

Throughout history, some people turned disloyal not for any material gain, but simply because they perceived treason to be their best - and often only - bet at survival. One of the most flamboyant examples of a politician embracing outrage and scandal that Antiquity has to offer is the Athenian Alcibiades, son of Cleinias.

Soldier, sailor, and statesman, he was, as recorded in Diodorus of Siculus' Library of History, "famed for his military competence" (17.18.2). A contemporary of Aristotle, Philip II of Macedon, and Demosthenes, Memnon of Rhodes rose from humble origins to command the whole of western Asia in the service of the King of Kings, Darius III of Persia, in a time of great danger and strife. His outstanding courage and military knowledge made him the only hope of saving the Achaemenid state from destruction at the hands of the expansionist Kingdom of Macedonia.

In 223 BC, King Seleucus III was murdered in Asia Minor while on campaign. In the chaotic aftermath of the assassination, a senior lieutenant named Achaeus took charge of the situation. He put the assassins to death, dispatched a loyal officer march mutinous elements of the army back to Syria, and carried on operations. Meanwhile, in Babylon, the cadet prince was elevated, becoming Antiochus III. The teenaged king was crowned amidst a series of crises.

Every spring, with the coming of fair weather to the Hittite kingdom's Upper Land, there came as well violence and terror in the form of marauding Kaska warriors from the Pontic Mountains to the north. A tribal folk of uncertain origins, primitive by the standards of Hittite civilization, they ranged about the countryside in forces of varying size, from small war parties to substantial armies. Usually, at the end of the campaigning season, they retired to their mountains with their ill-gotten gains. However, one fateful year during the reign of Tudhaliya III (ca. 1380-1350 BC), they came in multitudes, and they came to conquer.

The debate: Duncan B. Campbell, 'Where was the Battle of Mons Graupius - Search for a lost battlefield'.
Illustrated by Maxime Plasse.

We are unusually well-informed about the first 40 years of Roman occupation in Britain, thanks to the writings of the Roman historian Tacitus - in particular, the biography of his father-in-law, Agricola, whose seven-year governorship saw Roman arms reach Caledonia in present-day Scotland. Agricola's crowning achievement was his victory over the Caledonian chieftain Calgacus at the Battle of Mons Graupius, which forms the centrepiece of Tacitus' account. However, although Tacitus pain ts a stirring picture of the battle's ebb and flow, its precise geographical location remains elusive. Even with the growing contribution of archaeology, scholars still cannot agree exactly where the Battle of Mons Graupius was fought.