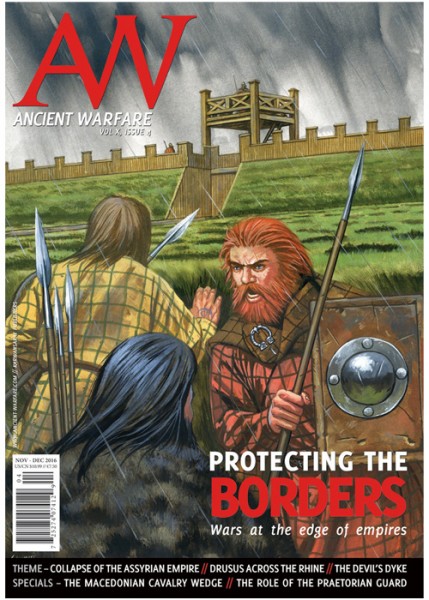 Wars at the edge of empires

Once people began to live in settled villages, they started to identify themselves not just based on their language and culture, but also on where they lived. Farmers became, to a lesser or larger extent, tied to the soil. As villages grew into cities and cities became the centres of larger city-states, kingdoms, and even empires, it became ever more important to define territories in a visible way, and to defend them whenever necessary.

The hills south of Jerusalem and west of the Dead Sea have usually been poor and remote. The area lacked treasures like cinnamon trees or sparkling rivers or a convenient route from one rich area to another. But accidents of climate and politics have preserved something else precious: a series of short Hebrew and Aramaic texts on potsherds.

Theme: Manousos E. Kambouris, "On the borders of the Hittite Empire - The Trojan War"

While there are many questions regarding Homer and his works, the Iliad and the Odyssey, one thing seems more or less certain. If there was a historical Trojan War, it must have been a conflict at the edge of the Hittite empire. Troy, as described by Homer, Thucydides, Pausanias, and other ancient sources, led a coalition or federation of states at the outskirts of the Hittite Empire, in a region called Assuwa. Assuwa was on friendly terms with Hattusa but, at the time, autonomous, despite previous heated conflicts against Mycenaean Greeks and Hittites alike.

By the time of Ashurbanipal, the Neo-Assyrian Empire had achieved its zenith. However, this enlargement produced an increasing strain on Assyrian military and administrative resources, resulting in an inability to act effectively against inevitable raidsfrom their powerful bordering nations, and to efficiently control any newly conquered lands. How did these insufficiencies eventually engender the Assyrian downfall?

Armenia in the first century AD became a battleground in the great power conflict between Rome and Parthia. The mountainous country was strategically located between each empire, bordering both Roman Asia Minor and the Parthian heartland on the Iranian plateau. Control of Armenia was thus of intense interest to both states.

Theme: Sidney E. Dean, "The Roman amphibious expedition of 12 BC 0 To the shores of the German Sea"

In 16 BC, a coalition of Germanic tribes led by the Sicambri crossed the Rhine into Gaul and defeated a detachment of the Fifth Roman legion, capturing the legion's standard. This provided Emperor Augustus an opportunity to pursue territorial expansion under the guise of securing the imperial borders. As part of this expansion, Augustus' stepson Drusus launched campaigns against the Germanic tribes east of the Rhine. His first stroke, launched in 12 BC, was an audacious amphibian campaign that took the Rhine fleet out to sea, leading his legions to fight further north than any Roman soldiers before them.

The last Roman province to be permanently added to the Roman Empire was Dacia. After two short but bloody campaigns in AD 101-102 and 105-106, Emperor Trajan defeated the Dacian king Decebalus and transformed his (former) kingdom into a new province, which would stay in the Empire until around 275, when Rome had to abandon it, due to the incessant barbarian attacks in the area.

The Csörsz-árok or Devil's Dyke, also known as Limes Sarmatiae, is one of the most elusive of ancient defensive lines. A lot of research has been carried out on the dyke, but most evidence is inconclusive. Contemporary sources are silent about its construction, but Hungarian folk tales from the Middle Ages name the mythical King Csörsz of the Avars and even the devil himself as its builder. What seems certain is that it was built as part of an agreement between the Romans and Sarmatians, and meant to serve as a first line of defence against barbarian incursions in the Carpathian Basin.

In the Roman imagination, northern Britain was a wild and dangerous land at the edge of the earth, the place, as the historian Tacitus puts it, 'where world and nature end.' Long after the construction of Hadrian's Wall - and later the Antonine Wall - in the second century AD, the British frontier remained a zone of conflict and confrontation.

In the late summer of 338 BC a Macedonian army estimated at about 30,000 infantry and 2,000 cavalry faced off against an allied Greek army of about 35,000 men. The Greeks had chosen a good position. Their left flank lay across the foothills of Mount Thurion, blocking the side road that led to Lebedea, while on the right, the line rested against the Cephisus River, near a projecting spur of Mount Actium. Hence both their flanks were secure.

The debate: Duncan B. Campbell, "Elite strike force or honour guard - The Praetorian Guard of Rome"

The Praetorians of popular imagination were the brutal selfserving 'power behind the throne' in ancient Rome, ruthlessly efficient in supporting their emperor, but quick to change their allegiance. Their status as a highly-paid corps d'élite is equally often linked with prowess on the battlefield. But is there any evidence to support their reputation as an elite strike force?

By the end of the 1950s, all the major film studios were still struggling to compete with the arrival of television. Faced yet again with dwindling audiences, MGM studios once more turned to a story from the ancient world to help save it from financial ruin. It was a huge gamble: Ben-Hur, based on a late-nineteenth-century bestselling novel by General Lew Wallace, was at that time the most expensive film ever produced. The studio had also made the film as a silent movie in 1925 that hadn't been an overwhelming financial success.