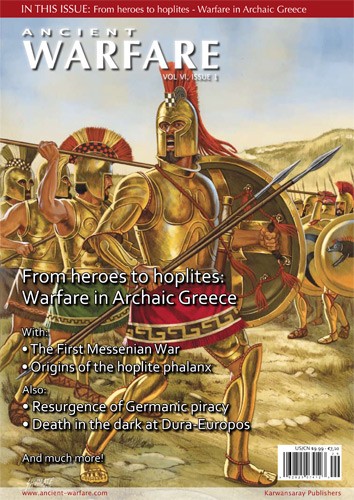 Theme: From heroes to hoplites: warfare in Arcahic Greece

With the exception of the New Testament, it is hard to think of another work of literature that has had such enormous influence on European culture and self-conception as Homer's writings. While it is still hotly debated whether Homer was the sole author of the Odyssey and the Iliad, whether he just compiled older poems into two grand works of epic, whether both epics were composed by the same hand or rather were the works of two or more anonymous authors, or indeed, if a poet named Homer even existed, it cannot be doubted that his works - especially the Iliad - have fascinated and influenced scholars and laymen alike for millennia. The scientific works written on this subject in the 20th century alone would probably fill a whole library, while the works of art and fiction inspired by Homer - novels, movies, paintings, plays, even songs - could easily fill another.

There are few sources more greatly revered throughout history than Homer. He has captured the imagination of every generation that has been privy to his works. Whether it is the content of his poetry or the elusive nature of his identity, it is fair to say that he has been the dominant feature in historiographical debate stretching as far back as scholars in Alexandria and before. The debate is still raging today.

The famous war between Chalcis and Eretria, which took place on the island of Euboea around 700 BC, was the largest and most remembered military conflict from the early Archaic Greek period. According to Thucydides, the Lelantine War, as we refer to it today, was the first ancient war in which "the rest of the Hellenic world did join in with one side or the other" (History of the Peloponnesian War 1.15.3). The unique place of this conflict in the history of Greek warfare is further confirmed by a tradition recorded by the ancient geographer Strabo, who reported that in the course of the war the contending parties formally agreed to ban the use of ranged weapons (i.e. slings, bows, javelins). And although the historical authenticity of this agreement is unclear, it has led modern historians to suspect that war in the Archaic Greek period might have been governed by similar rules and conventions.

"When someone asked why they visited disgrace upon those among them who lost their shields, but did not to those who lost their helmets or their breastplates, he said, 'Because they put on these for their own sake, but the shield for the common good of the whole line'." Thus explained the exiled Spartan king Demaratus the cohesion of the Greek phalanx his Persian audience (Plutarch, Moralia 220a (2))

For almost twenty years, the group of hamlets forming the polity of Sparta fought against the people of neighboring Messenia under circumstances shrouded in historical mystery. The war, fought during the transitional period at the beginning of the Archaic Age of Greece, allows us to explore the origin of the hoplite phalanx along with the origins of the Spartan militaristic society.

Theme: Gareth Williams, 'Tyranny and the hoplite reform - From rags to riches'.

For many, the introduction of hoplite armour and the Greek phalanx at the end of the archaic period is evidence for a rising middle class who, due to their increasing wealth, could now afford to purchase the hoplite panoply and thus fight shoulder to shoulder with the aristocratic elite. Their expanding role in defending the polis nurtured an egalitarian spirit and a desire for political parity.The elites were unwilling to satisfy these social urges, enabling a 'people's champion', the tyrant, to emerge in several cities. These tyrannies openly supported and endorsed the grievances of this new politically active class. But is this true? Is there evidence that this new 'middle class' was seeking political equality due to their new role as hoplites? Who did the tyrants actually enlist to seize power in a polis?

The frieze of a unique Late Geometric oinochoe (wine jug) found near the Tholos in the Athenian Agora in 1935 (P4885) seems to depict conjoined twins in combat; two assailants attack as the twins dismount their chariot. Such a remarkable scene is intriguing to say the least. On further investigation, however, this figure is not at all what it seems.

Pirates and piracy are recurring themes in Roman literature; murder, pillage and kidnap by seaborne raiders were familiar terrors for many inhabitants of the Empire throughout its history. The perpetrators of these deeds - defined as armed robbers whose activities normally involve the use of ships - were, and still are, called pirates. The problem of piracy had long plagued the empire. Though never eradicated, it was more or less under control during the Principate (31 BC - AD 284). However, with the internal destabilization of the 3rd century AD came an upswing in piracy caused in part by Germanic peoples who had taken to the seas.

The Debate: Duncan B. Campbell, 'Did the Sassanids use chemical warfare - Death in the dark at Dura-Europos'.
Illustrated by Andy Brozyna

The ruined city of Dura-Europos, 'Pompeii of the Syrian desert', has several claims to fame. Students of ancient military equipment are fascinated by the rich assemblage of arms and armour recovered by excavation in the 1930s. Historians of warfare are captivated by the city's defences, particularly the many-towered 'desert wall', which still stands to full height in many places. Both focus on important features of the site. However, far rarer in the annals of ancient warfare are the Sassanid tunnels, hidden deep below, that were designed to undermine the wall and infiltrate the city. A recent theory has suggested a further distinction for Dura-Europos, as the site of the first recorded use of chemical warfare. But can the evidence support such a sensational claim?