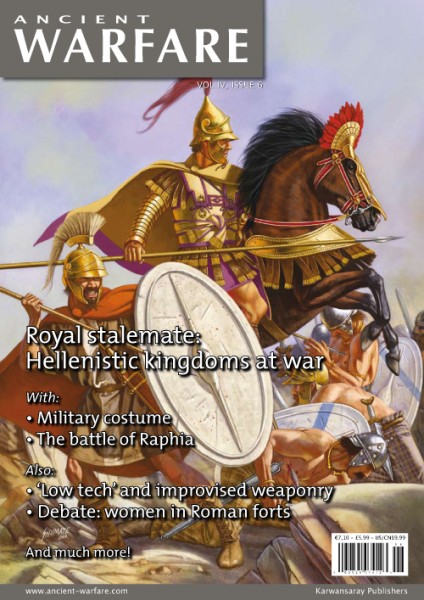 In 300 BC the world that lay east of a line drawn from the Adriatic to Cyrene, and as far east as India, was the realm of Alexander the Great's heirs. In this world three real Methuselahs saw to the bedding in of their dynasties.

The source: Michael J. Taylor, 'Disciplinary measures - The Amphipolis regulation' As much as he admired the Roman army, the historian Polybius (c.150 BC) depicted Macedonian soldiers as highly disciplined and exceedingly effective: "They are not only intrepid in ground combat, but readily undertake temporary service at sea, and are also industrious in digging trenches, erecting pallisades and all such hard work, just as Hesiod represents the sons of Aeacus to be 'rejoicing in war as if it were a feast.'" (5.2.5-6, Loeb translation). Confirmation of this image was found in 1934, in the form of a severely damaged inscription from Amphipolis.

The Hellenistic period was a time of widespread, increasingly profesionalized warfare in the eastern Mediterranean. Beginning with Philip II, Macedonian kings asembled powerful armies of mixed troops, composed of mased cavalry, mobile skirmishers and a backbone of well-trained heavy infantrymen who formed up in the 'Macedonian' pike-armed phalanx. The gradual expansionism of the latter half of the fourth century BC erupted with Alexander the Great, who incorporated huge swathes of the western half of the Old World into his empire, but came to an end with his death and his domain's fragmentation into smaller warring states. As a result of the spread of Macedonian soldiers throughout the Hellenistic world, their costume became fashionable among soldiers everywhere.

Theme: Mateusz Lobacz, 'At the edge of Hellenism - Armies of the Greeks in Bactria and India'. Illustrated by Angel Garcia Pinto.

After the death of Alexander the Great , his spear-won empire shattered into pieces. One part of his empire was known as Bactria, a land previously known only from tales and myths. As a result of the populating efforts of Macedonian soldiers, this land became a thriving Hellenic community. Mountainous territories of modern-day Afghanistan and southern Tajikistan formed a barrier between the two entirely different worlds of 'civilized' sedentary peoples and in the vast stepe wastelands wandered nomad tribes of Iranian stock.

On the afternoon of June 22, 217 (all dates are BC) Ptolemy IV Philopater, likely at the insistence of his generals, resolved to bring Antiochus III to battle. The two armies had been camped opposite each other for almost five days and the botched attempt on Ptolemy's life by Theodotus, his erstwhile governor of Coele Syria, now in Seleucid service, was a product of this procrastination (Polybius 5. 82.1; 81.1 -6 - all references to this author unless otherwise stated). Two days previous, Antiochus had closed the distance between the two camps from 1.8 kilometres to a little less than one kilometre. As a result there "were frequent struggles at the watering-places" as well as "infantry and cavalry skirmishes in the space betwen the camps" (5.80.5-7).

"When he saw this, and observed that the rest of the Macedonians took the peltai that hung on their left shoulders, and brought them round before them, and all at once stooped their pikes against their enemies' shields, and considered the great strength of this wall of shields, and the formidable apearance of a front thus bristling with arms, he was seized with amazement and alarm; nothing he had ever sen before had been equal to it; and in after times he frequently used to speak both of the sight and of his own sensations." (Plutarch, Life of Aemilius Paullus 19.1)
Readers may recall that in a previous article I described Sparta's demise as a military power at the hands of Macedon during the battle of Sellasia in 222 BC (Ancient Warfare II.2). This article provides a sequel by describing Macedon's demise in turn.

Theme: Christopher Webber, 'Fighting on all sides - Thracian mercenaries of the Hellenistic era'

The Thracians were one of the most popular peoples to be employed as mercenaries or allies by the Hellenistic states : they were even used by the Romans. Thracians were employed as light infantry (armed with bows, slings or javelins), as medium infantry, and as light cavalry. Their unique fighting capabilities and the strategic location of their homeland meant that they were involved in all conflicts in the eastern Mediterranean region. The Romans developed a high regard for the Thracians, owing to their ferocity and physical strength. Thrace later became Rome's third most important recruiting ground.

Not all Greek and Roman soldiers went into battle equipped with helmet and cuirass, sword, spear and shield. Many had no armour at all and were armed with the most basic of weapons - sharpened sticks or clubs, and stones they picked from the ground or collected from stream beds.

The debate: Duncan B. Campbell, 'Women in Roman forts - Residents, visitors or barred from entry?' Illustrated by Andrew Brozyna

Twenty years ago, Margaret Roxan, well known for her studies in the Roman auxilia, raised the subject of women on the frontiers. Of course, it was never doubted that women and children were part of the communities that often grew up outside Roman forts, but there has been a recent trend towards postulating their existence within the forts as well. Criticism has been levelled at traditionalists, who view military garrisons as male-orientated environments in which the fort ditches formed a symbolic barrier between military and civilian. But is there any firm evidence to disprove this? Did women ever live in roman forts?