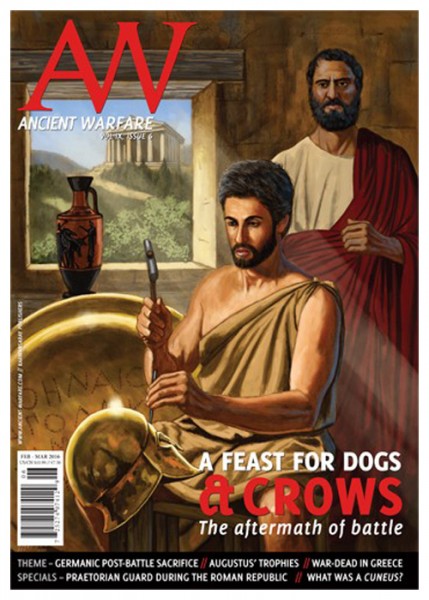 When we think about warfare in the ancient world, the first thing that probably pops into mind are images of men, clad in armour, fighting each other. Battle usually draws a lot of attention, and there have been many heated discussions about the nature and mechanics of combat. By comparison, there is often less interest in what happens after battle has been decided and the dust has settled. But the aftermath of conflict is no less interesting than the fight itself, as this issue of Ancient Warfare magazine will demonstrate.

War for the ancient Greeks was a common occurrence. For civilians, war was an unstable mixture of hardship, including the risk of being robbed by passing armies. For those who served their city or king, battle meant the risk of getting wounded or killed in single combat or in the claustrophobic shuffle of phalanx formations. Survivors would be faced with the devastations of the battlefield. Here, on the fields on which the slaughter of the day had ended, the victorious side would search and collect clothing, armour, weaponry, and other valuables from the bodies of friend and foe alike.

Post-battle religious ceremonies have always been integral to warfare. Survivors thank their god or gods for sparing their lives, victors rejoice in their divine favour, and losers pray for better fortunes next time. What varies from era to era and culture to culture are the forms of post-battle worship. Pledges of behaviour, libations of wine, dedications to temples all seem civilized enough. But too often, expressions of faith have displayed a darker side. When the Germanic gods invested in the victor's cause, they wanted their share of the spoils - in other words, sacrifice.

Following a battle, victorious Roman troops would erect an array of captured arms and armour and dedicate it with gratitude to the gods. After the battles of Actium and Alexandria that eliminated his rivals Caesar Augustus developed the temporary display of war spoils into enduring symbols - featured on coins, inscriptions and public monuments - to celebrate the glory of his conquests and of the peace achieved thr ough his victories.

In the aftermath of victory over Antony and Cleopatra in August of 30 BC, the senate of Rome lavished numerous expressions of praise and reward upon Octavian, amongst which was his new title of Augustus. Some of these were politely declined by the absent victor, who would remain in the eastern Mediterranean resolving issues until the following summer. Yet according to Dio Cassius (51.20), the decree which pleased Octavian most was the decision taken by the senate in his absence to close the gates of Janus, this being done in a ceremony undertaken on 11 January 29 BC, as recorded by Verrius Flaccus in the Fasti Praenestini.

Once a hoplite engagement had been initiated, what was the 'protocol' for those who ran away or who surrendered? Were there unwritten laws or customs which dictated the activities of the Greeks during these final stages of the battle? Was hoplite warfare dominated by such constructs, or could they be overruled by more pragmatic objectives?

In the aftermath of battle, those who survived were left to contemplate an eerie spectacle. What confronted them was a scene of distorted humanity: a field of broken bodies, abandoned weapons and the mournful cries of the wounded and dying. Birds circled expectantly overhead, whilst dogs scavenged eagerly on the periphery. The field itself was littered with the dead of both sides, now indistinguishable in their shared and final fate. Indeed, the ancient Greeks offer us a complex picture of the glories and triumphs of war, but few scenes strike the modern reader as strongly as the pathos of the aftermath of battle.

All soldiers go home. It is a reality that has been faced by all survivors of all conflicts, throughout history - all soldiers need to go home. From the victory parades of the Roman Empire, to the triumphal marches of Napoleon, the image of a victorious homecoming is synonymous with military power and domination. In classical Greece, a land and period that idolised the military man - and the hoplite in particular - the imagery of homecoming, of victory, and of the pride and glory felt by the individual or the state should have been prolific. However, this was not the case.

The Praetorian Guard came to power in the Late Republic, becoming the most famous and controversial unit in the imperial army. Its name became synonymous with intrigue, greed, conspiracy, betrayal, and assassination. Quickly assuming the status as the real power behind the imperial thrown, it was responsible for the overthrow, abandonment, or murder of fifteen out of 48 emperors between 27 BC and 305 AD. Yet the original purpose of the Praetorian Guard, at least since the third century BC, was far from the brutal history it eventually left behind.

The debate: Michael J. Taylor, "A look at the Roman wedge formation - What was a cuneus?"

Almost every muster of Roman re-enactors inevitably involves the band of Romans forming into a lazy 'V' and charging across a field. This demonstration presumes to replicate an actual Roman infantry tactic, the cuneus or 'wedge'. The wedge is attractive to re-enactors in part because it can be done with a small number of members on-hand: whereas it takes at least sixteen to make a respectable testudo, a band of five or so hardy souls will suffice for the wedge. Cuneum facite is one of the standing commands in the Latin drill manual of the famed Ermine Street Guards.