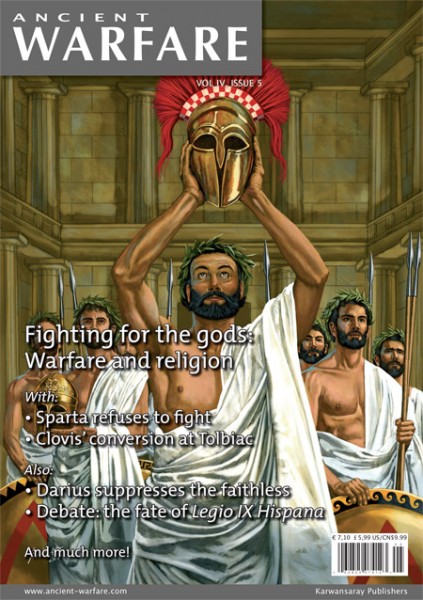 Theme: Fighting for the gods - Warfare and religion

Introduction: P.Lindsay Powell, 'Introduction to the theme'
For the Greeks and Romans of the archaic and classical eras wars were often fought when oaths and treaties, made sacred from having been witnessed before the gods, were broken. Who won, they believed, was a matter for the gods to decide. Before battle commenced, city states, soldiers and their senior officers actively curried favour with the gods to improve their odds of ultimate victory - or at least of survival. Studying how the Greeks and Romans understood the relationship between gods and men provides a vital glimpse into the mindset of the ancient warrior.

The source: Paul Elliott, 'Inside a temple of Mithras. secrets of a military cult'

There's a large mound next to the road along Hadrian's wall called Carrawburgh (pronounced 'kara-bura'), the Roman fort of Brocolita, with an excavated stone temple to the god Mithras behind it. It's easy to miss, but a crucial part in the history of everyday life on Hadrian's Wall. The followers of Mithras formed a mystery cult, a secret society that was popular with some of the soldiers long Hadrian's Wall. What was found at Carrawburgh gives us a rare insight into the workings of this military cult.

There are many ways to tell a story. History has enjoyed telling the tale of the great 5th century eastern oppressors invading the small but free Greek states, culminating in a David versus Goliath victory of democracy over autocracy. The great victories of Marathon and Plataea, combined with the heroic stand of Leonidas' 300 (ignoring the 2,000+ other Greeks who were present), has given rise to a popular and moral tale of freedom versus control, good versus bad, right versus wrong; of people standing up for what they consider just and fa ir. But there is a different story to tell. A story of cultural restraint, of political bickering and of piousness resisting practicality - this is the story of Sparta, no longer behind her mirage.

Theme: Corrado Re, 'Consular suicide - The practicalities of devotio'

For the Romans, as for most ancient peoples, victory was as much a matter of divine fa vour as of military valour. They had several rites connected with warfare, most dating back to their very earliest history. One of the most astonishing practices was the act of devotio. According to Livy and Cicero, it was enacted three times between the 4th and 3rd century BC. Every time the actor was a consul named Publius Decius Mus: father, son and grandson. This was probably an expression of gens (family) private religion and tradition. The first recorded devotio was performed at the battle of Veseris, against a Latin army; the second one at Sentinum, in the 'battle of the nations', against a coalition of Italic and Gallic peoples and the final devotio took place at Ausculum against Phyrrus. We know the narrative, but what happened at such events?

The goddess Epona is generally assumed to be a pre-conquest Gallic deity whose worship was later spread beyond Gaul by local cavalry in Roman service. However, no inscriptions to Epona are known from Gaulish alae and cohortes equitatae. A connection with the Equites Singulares Augusti, particularly under Hadrian, helps resolve this mystery.

Theme: Mark Woolmer, '"In the name of Ahuramazda" - Darius' wars against the Elamites and Scythians'

In September 522 BC, Darius I, along with six co-conspirators, seized control of the Persian throne. Darius I, also known as Darius the Great, was the third Great King of the Persian Empire who ruled at the peak of its power and influence. However, his seizure of power was met with rebellions throughout the empire forcing Darius to innovate in terms of his political, economic, religious, and military policies. He therefore reorganised the empire by dividing it into provinces and placing satraps (regional governors) to oversee them, he introduced a new monetary system, made Aramaic the official language of the empire and initiated a number of construction projects. To combat insurrection, he used religion...

Theme: Alberto Pérez, 'Off with their heads! Headhunting and scalping in antiquity' Cast of a monument with severed heads found at Entremont

Decapitation of fallen enemies was a common post-battle practice in many cultures from the moment when men guessed or imagined a separation between body and soul, between the animated life whose seat is the former and the spiritual dimension of that life that is embodied by the latter. Peoples as diverse as the Assyrians and the Romans indulged in it, although of course the meaning of this act was not the same in all cases. It is not easy to chop off a human head. In fact, it is very difficult to attain in combat with a single blow of a sword,despite what Hollywood may show, so it was normally done post mortem. Why bother with such a tedious action once your enemy is already dead?

Although Alexander the Great was not the first human to receive divine honors, his self-deification set an example for Hellenistic kings, Roman emperors, and other rulers. However, this would not have been the case if Alexander's self-deification had not been entirely rational and if it had not offered advantages that no ancient ruler could aford to ignore.

Clovis I has been referred to as the Frankish Constantine. Like the Eastern Roman emperor, this pagan German king claimed victory in battle after vowing allegiance to the Christian deity. But the impact of Clovis' religious conversion went far beyond the battlefield at Tolbiac in AD 496. His choice laid the path for Frankish domination over Europe, and influenced the course of world history.

The weapon: Paul McDonnell-Staff, 'The sign of Constantine's vision: religion and the late Roman shield'

Religion has of course always played a major part in warfare. As the modern saying puts it: "There are no atheists in a foxhole." Since time immemorial a man about to risk his life on a battlefield invokes the aid of his gods. One famous particular instance of this occurred in AD 312 just before the battle of the Milvian Bridge, outside Rome, when Constantine, having been 'aised to the purple' by the troops of his fa ther, in York, confronted the Emperor Maxentius to decide who would rule the Western Empire.

The last evidence for IX Hispana in Britain - Artwork by Andrew Brozyna The debate: Duncan B. Campbell,
'The fate of the Ninth. The curious disappearance of Legio IX Hispana'

In 1954, Rosemary Sutcliff published a novel about Roman Britain. It caught the imagination of an entire generation of readers with its tale of the Ninth Legion, destroyed in the mists of Scotland. A BBC dramatisation captivated a fresh generation in 1977. And now a new motion picture is set to revive interest in the fa te of the Lost Legion. But was it really destroyed in Britain during the reign of Hadrian? Or have we fa llen for a myth that should have been laid to rest fifty years ago?