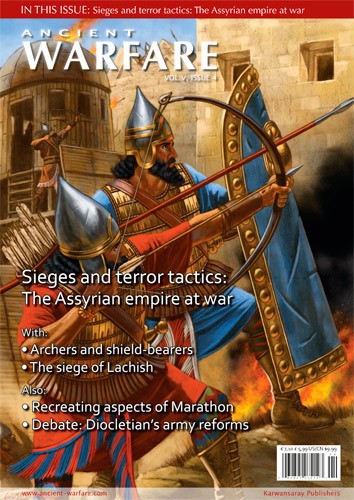 Theme: Sieges and Terror Tactics: The Assyrian empire at War

In the realm of warfare, the Assyrians were unmatched in innovations, new weapons and institutional organization. Their military deeds were etched on stone reliefs that once adorned the fabled palaces of Nineveh, Khorsabad and Nimrud. Archaeologists and historians can refer to inscriptions, chronicles and to the correspondences between Assyrian kings and their vassals to reconstruct the history of the empire.

During the construction of the Pazarcik dam in southern Turkey, an Assyrian stone stele was unearthed. It narrates the settlement of a border dispute between two Iron Age Anatolian kingdoms, arbitrated by two Assyrian kings between 805 and 775 BC. It was inscribed at two different times on the obverse and the reverse in cuneiform Akkadian, the script and language of the great civilisations of Mesopotamia.

Historical evidence concerning the Assyrian army can be drawn from a number of sources. Clay tablets written in cuneiform script are in general, though not exclusively, administrative documents. They can shed light on aspects of the way in which the Assyrian army was equipped, organized and administered. Annals listing the achievements of various Assyrian monarchs, and other historical documents can also be of great relevance, for giving us 'the big picture'. They detail the way in which campaigns were fought, but are helpful above all for
their information on the strategic and operational workings of the army.

The rapid rise of the last of the Assyrian empires - the Neo-Assyrian empire lasting from circa 911-612 BC - seems to have been helped enormously by its development of advanced siege machines. What little we know about these comes from archaeology, and importantly the iconography of various palace friezes. On the latter the Neo-Assyrian kings proudly recorded the successes of this 'new technology' in their palaces in Nineveh and Nimrud.

Theme: Gareth Williams, 'Assyrian propaganda and the siege of Jerusalem - 'Like a bird in a cage'. Illustrated by Johnny Shumate.

A walk through Room 10 of the British Museum may, at first, seem to confirm the generally accepted impression of the Assyrians. On display are the bas-reliefs from the walls of Sennacherib's palace at Nineveh which depict, in all its gory detail, the siege and fall of the Judean city of Lachish in 701 BC. Portrayed are people being flayed alive, impaled captives exhibited before the city walls; others are begging for mercy before the enthroned figure of Sennacherib while more unfortunate ones are put to the sword. These reliefs reinforce the received reputation of the Assyrians who are often depicted as a bloodthirsty and martial society, glorying in combat while relishing the savage destruction of their enemies.

Assyrian Cavalry In 701 BC, the Assyrian army launched a punitive campaign against the small kingdom of Judah, ruled by King Hezekiah. This campaign was one of many launched by the Assyrians and would remain unremarkable except for the fascinating confluence of biblical texts and archeology which have made this campaign an important case study in Assyrian methods of war and a surprising view of the Bible as history.

Assyria possessed one of the most warlike cultures of the ancient Near East. This brutal culture was greatly influenced by the constant bloodshed which followed the founding of their first cities such as Nineveh and Ashur. As Assyria grew into an empire, the defensive stance engendered by constant attacks from their neighbors soon transformed into a need for offensive action. In order to undertake the massive campaigns that eventually stretched the borders of the empire from the Mediterranean to the Persian Gulf, the Assyrians raised the first truly professional army in history.

The Toledo Helmet The Find: Murray Dahm, 'The Toledo Roman helmet - The ring of truth'.

The Toledo Museum of Art in Ohio houses a fascinating (and divisive) silver Roman helmet. The helmet is fascinating (and seemingly unique) because of the material it is made of and its ringcrest is of a type not otherwise known to survive, but which is shown in several artistic depictions; divisive because many consider the helmet a forgery.

Fought in 490BC, the battle of Marathon is one of those landmark events around which a substantial legend has grown and which seems to punctuate the pages of history. The battle was the first great clash between the forces of the mighty Persian Empire in the east and the small, semi-independent, Greek city-states in the west. It would cast ripples which would influence the course of history for centuries to come.

The Debate: Duncan B. Campbell, 'Did Diocletian overhaul the Roman Army? - Restorer of the world'. Illustrated by Angel Garcia Pinto.

It is usually difficult to identify the watershed that marks the demise of an old system and the birth of a new one, but AD 284 is an iconic example. In that year, the accession of Diocletian ushered in a new style of Roman government in which the emperor's official title, hitherto Princeps ("first citizen") or, more formally, Imperator Caesar ("Caesar the commander"), became instead Dominus noster ("our Master"). In conjunction with this change of attitude, scholars have sought to identify changes in policy, and it is common to attribute the beginnings of a new style of Roman army to the reforming zeal of Diocletian. But was he really a reformer, or did he merely strive to restore a broken system? Was he really an innovator, or did he simply take the old system to its logical conclusion?