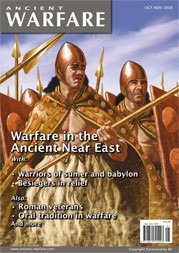 Theme: Warfare in the Ancient Near East

Mesopotamian historical documents are different from Greek and Roman sources, and are not easy to read. However, they contain important information and belong to a scientific tradition that is interesting in itself.

Theme: Mark Schwartz, 'Warriors at the dawn of time'.
Illustrated by Johnny Shumate

Between the 9th and 7th centuries BC the Assyrian empire was at the peak of its power terrorising countries of the near east. The numerous military campaigns were immortalised by their kings in reliefs that decorated their palaces. Today these are an invaluable source of information on the warfare of that epoch and region, in particular on the siege techniques of the Assyrians and the fortification of the ancient near east.

The battle of Megiddo, fought by Egyptian forces under Pharaoh Thutmose III against a coalition of Canaanite city-states, is the first ever battle to be recorded in detail by contemporary chroniclers.

At the height of its power, the Roman eastern frontier extended from Armenia to Arabia, comprising a vast variety of landscapes and cultures. For a long time this region had been a hotbed of conflict between two great empires: Roman and Parthian. Their intermittent warfare caused them not only to fine-tune their powerful armies, but also to develop innovative intelligence-gathering methods.

By the time of the Principate, veterans - in the Roman sense: retired soldiers - had stopped being a problem and they became in fact one of the most important factors of development and Romanisation of the empire. What happened in the meantime?

The Siege: Duncan Campbell, 'Between Rome and Parthia'.
Illustrated by Andrew Brozyna.

Few cities of the Near East remained beyond Roman control for long. The so-called client kingdoms of Syria and Arabia were gradually absorbed into the empire. Even Dura Europus, far down the Euphrates, was held by Rome for almost a century. But farther afield, between the Tigris and Euphrates, the desert city of Hatra jealously guarded her independence.

In the Greek and Roman worlds, military knowledge was traditionally passed down from father to son, or by older relatives who had served 'in the wars'. The details of this practice are almost totally lost to us and we are forced to rely on what was written down. Luckily for us, literature since Homer has been concerned with wars and warfare so there is much to read and absorb.