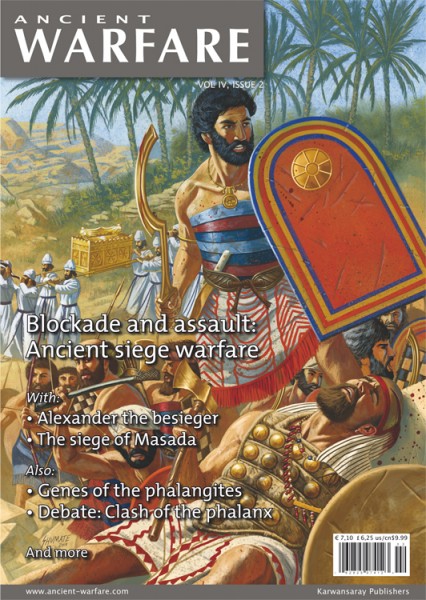 Introduction: Ross Cowan, 'Introduction to the theme.'
Siegecraft was central to the Greek and Roman art of war. The popular imagination may be dominated by images of epic field battles involving colliding phalanxes and dramatic cavalry charges, but victory in the field rarely resulted in a war being won, and strategically positioned fortifications, providing refuge to large communities and dominating lines of communication and trade routes were oftenthe principal focuses of conflict. One side would retire into its fortresses and dare its enemies to waste their lives, financial, material and other resources in attacking the walls.

The Source: Sean Hussmann,'Reports from a witness. Thucydides on siege warfare.' As a naval superpower, in an age of triremes that had to be put to shore each night, Athens depended upon controlling safe ports and points of anchorage all over the Aegean. This was not just a purely military matter. Athens procured most of its grain supply by sea, from the fertile lands around the Black Sea. Protecting the shipping routes to the Dardanelles was therefore a vital cornerstone in the foundation of her empire. Had these routes be interrupted by a rival power, the consequences for the Athenian populace would have been deadly. In the winter of 424/423 BC, an Athenian strategos (general) named Thucydides was assigned the task of protecting the coastal region of Thrace against any such threats.

Theme: Richard Evers, 'A wall of men, instead of bricks, is best. Success and failure in Spartan siege warfare.'
The Spartans are not famed for their fortifications or siege techniques. Sparta reportedly even refused to build a wall around the city when it adopted Lycurgus' precepts. During the Peloponnesian war the Spartans seem to have wandered about Attica aimlessly, not daring to attack the Long Walls of Athens. But there are some notable events that show that Sparta did have walls surrounding its city, and did engage in siege warfare with considerable success.

Theme: Joseph Pietrykowski, 'With winged soldiers. Six sieges of Alexander the Great.' Illustrated by Johnny Shumate.
Although best known as a battlefield commander of unrivalled genius, Alexander the Great was also one of antiquity's most prolific and successful besiegers. During the course of his eleven year career of conquest, countless walled cities and strongholds from Greece to India and Afghanistan to Egypt fell to his world-class siege train. Indeed, Alexander was so extraordinarily successful in taking city after city that it was often said that no fortifications could stand against him.

Theme: Duncan B. Campbell, 'Capturing a desert fortress. Flavius Silva and the siege of Masada.' Illustrated by Igor Dzis and Andrew Brozyna
It is not often that the three disciplines of archaeology, ancient history and epigraphy come together to illuminate a particular event. But this is precisely what happens in the case of Masada. The desert fortress built by Herod the Great is still surrounded by the remains of Roman siegeworks built at the end of Rome's First Jewish War. And, while Josephus provides the historical narrative, a detailed military career inscription brings Masada's Roman captor to life.

Theme: Paul McDonnell-Staff, 'A war of logistics. The siege of Jerusalem, 66 AD' Illustrated by Carlos de la Rocha
The campaign for Jerusalem in 66 AD was the worst defeat Rome had suffered since the Teutoburg Forest. How had this disaster to Roman arms come about? Roman armies had a well-earned reputation for invincibility, and Cestius Gallus was no fool. The answer lies in logistics, for that is where Gallus' true problems lay. The emperor Nero told the Roman people that the disaster had been caused by failure of generalship, rather than Jewish valour - and in this he was undoubtedly correct. In order to see how this occurred, we must examine the main factors that affected the campaign.

Features
Special: Stephan Berry, 'Genes of the phalangites. Bioarchaeolgy and the ancient battlefield, part 2.' Illustrated by Andrew Brozyna
The mules of the Varian army died at exactly the right time, perhaps not in Varus' own view, but certainly so in the view of modern archaeology. From a sophisticated chemical analysis of the animals' tooth enamel, archaeozoologists have been able to date their death to late summer, fitting perfectly into the established date of September 9 AD for the Varian disaster at the Teutoburg forest.

The debate: Murray Dahm, 'The debate: 'The shove' or not 'the shove.'
Illustrated by Andrew Brozyna
The term othismos (literally 'shoving' or 'pushing' although there are myriadother meanings) is usually considered to typify classical hoplite combat when two lines of hoplites met in battle. It has been commonly likened to a giant rugby football scrum. Debate rages, however, as to whether this othismos was real or metaphorical, literal or figurative, and scholarship divides basicallyinto these two camps. And, whilst not as vitriolic as some academic debates, it has been couched in the quasi-religious terminology of orthodoxy and heresy. The debate is like an othismos itself with each argument pushing and probing the other, some arguments pushing the other's back, forcing ground to be given while elsewhere having to give ground itself.