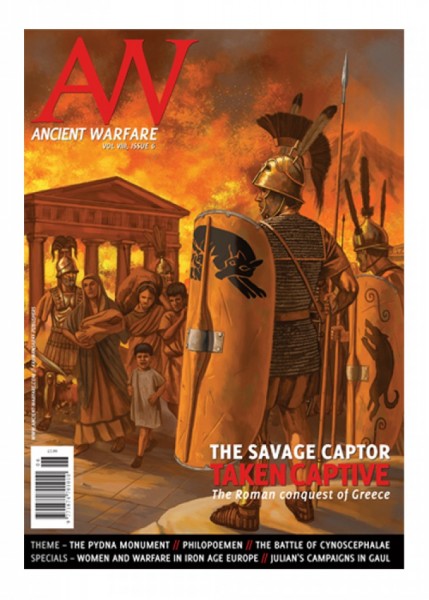 Theme: The Roman conquest of Greece

From the northern rivers and plains of Macedon to the southern heart of the peninsula - amongst whose ragged mountains and plateaux nestled the venerable poleis of old Greece - countless kingdoms, city-states, leagues, and tribes struggled by turns for supremacy and survival in a flux of ever-changing alliances. Into this world, already ancient before their arrival, crashed the youthful republic of Rome that, although relatively unknown at the outset, eventually came to dominate a region once so fiercely independent.

The source: Michael J. Taylor, "The Pydna Monument at Delphi - Set in stone"

Having defeated and captured Perseus, the last king of Macedonia, and imposed a post-war settlement, Aemilius Paullus set off on a grand tour of Greece, a combination religious pilgrimage, imperial survey and well-earned vacation. His itinerary inevitably included the great Pan-Hellenic sanctuary of Apollo at Delphi, and there, amongst the other monuments, he gazed upon a pillar that Perseus had been constructing for himself; at the top was a platform where a royal statue would stand. Paullus promptly ordered the incomplete pillar reworked as a monument to himself, with his own statue installed in the place of the likeness of the deposed king.

In 200 BC, the Roman Republic declared war on King Philip V of Macedon for the second time. Although Macedonian strength had declined since the reign of their most famous monarch, Alexander the Great, Philip was still formidable, and maintained a tight grip over the Greeks to the south via a web of alliances, garrisons, and fortified cities. Seeking to loosen this hold and stretch their enemy's resources, a Roman expeditionary force rapidly crossed the Adriatic, striking targets throughout Greece and the neighbouring regions. Before the year was out, many Greeks would see legionaries tramping through their fields and the sails of Roman warships billowing in their waters.

The reenactor: Jasper Oorthuys, "Two Roman legionaries of the Republic - Soldiers of Rome"

Everyone instantly recognizes the Republican Roman soldiers to the right. Chainmail, short sword, helmet, scutum, and let's not forget the caligae, mark these men as legionaries. Pinning them down chronologically requires an examination of their kit.

At a time when the history of Greece is traditionally cast in the shadow of their Macedonian superiors, a small glimmer of light emerges with the life and career of one of the greatest innovators of warfare produced by any of the Greek states. Philopoemen does not stand out as the best of a bad bunch. He was a man of resilience, fortitude and cunning; a man who could match the military ingenuity of generals such as Iphicrates and Alexander the Great on a fraction of the budget. He was loved by the Greeks, respected by the Romans, and feared by his enemies. It is time for his story to be more widely known.

Theme: Michael Park, "The Battle of Cynoscephalae, 197 BC - The dog's heads"

The mist, though clearing from the ridge tops, hugged the ground and rolled into the Enipeus valley to the south. Though the screams and shouts of the combatants could be heard from down the slopes, little could be discerned. In his camp, Macedonian King Philip V vacillated over whether to commit or to withdraw. The Illyrian and mercenary thureophoroi - all of his auxiliary troops aside from the Thracians - as well as more than half of his cavalry, had been committed to the escalating 'encounter' skirmish that had become a battle for the heights of Cynoscephalae (the Dogs' Heads), a ridge of precipitous hills with parallel outliers jutting into the plain of Pharsalus.

For the Greeks of the Iron Age and the Archaic period, weapons were among the most powerful symbols of one's place in society. Elites carried weapons openly in everyday life and decorated their houses with expensive arms, while most of the poor fought with whatever rudimentary weapons they could fashion or obtain. Examining the role of weapons in society is of just as much importance for the historian of the late Classical and early Hellenistic Greek city-state.

The ultimate victory of Rome in the wars with Macedon has been attributed to superior organization and tactics. Organization and tactics are inherently linked to the armament and armor deployed by each combatant. The versatility and flexibility of the legions were possible because Roman weapons and shields allowed soldiers to quickly shift from one threat to another, and to traverse difficult terrain without breaking formation. The Macedonian reliance on the pike as the primary offensive weapon made their army unwieldy - an opening the legions were quick to exploit.

Special: Alberto Pérez Rubio, "Women and warfare in the Late Iron Age - Fight like a woman"

"Half of the warriors were female! Shield-maidens are not a myth!" In the wake of the success of the TV series Vikings, a 2011-paper by Shane McLeod that examined the sex ratio of Norse migrants to eastern England was widely publicized, albeit in a distorted way. McLeod compared bone evidence from several burials with their grave goods, confirming that a female could be buried with 'male' goods such as weapons: a notion already widely acknowledged among archaeologists.

Flavius Claudius Julianus (Julian) was appointed as Caesar by the Emperor Constantius II in AD 355. Prior to his appointment, Julian had held no previous political or military position. However, he was one of the last surviving relatives of Constantius. The Emperor, fighting in the east, needed someone to take care of the frontier issues along the Rhine. For too long the Germans had been raiding and living within Gaul without any real reprisals.