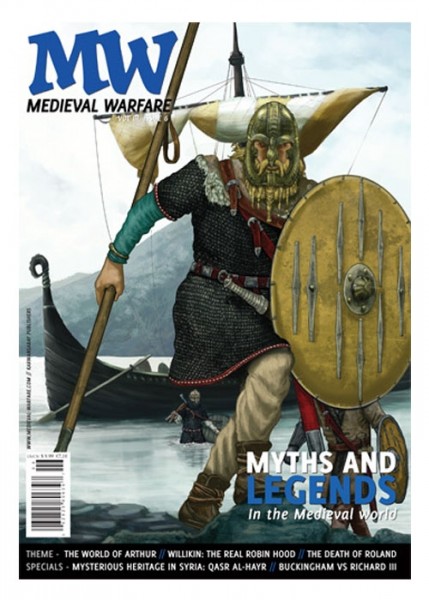 Heroic legends in the Middle Ages

The topic of this issue, legendary heroes, might seem simplistic at face value, but scratch the surface and multi-layered complexities are revealed. That makes the theme of this issue a difficult one that requires a careful approach for several reasons.

Theme: Kai Grundmann, 'The ancient warrior and his medieval legacy - Theoderic the Great'.

Theoderic, who ruled the Goths from 471 to 526, led them to Italy and built a strong successor kingdom to the Roman Empire. He almost achieved imperial power and was likened to emperors like Trajan by his Roman subjects, while his Goths revered him for his cunning strategy and his bold charges into the enemy lines when he was younger. Theoderic quickly became a character of early medieval legends and sagas, a role model for Charlemagne and noble knights, but he was also condemned by the Church for being an Arian heretic, who had left Pope John I to die in prison and had executed the 'innocent' noble Symmachus.

Theme: Patrick S. Baker, 'The Battle of Roncevaux Pass - The death of Roland'.
Illustrated by Carlos Garcia and RU-MOR.

Roland, paladin of Charlemagne and bravest of all the French knights, was dying. He and his fellow Christian warriors had killed tens of thousands of the Saracen enemy, but of the 20,000 men under his command, only Roland was left alive. Having blown his horn, and placing his unbreakable sword, Durendal, nearby, Roland lay down and "died like a conqueror, face to the foe" (The Song of Roland, trans. by A. S. Way, p. 92), without having been touched by an enemy weapon. Or so the Chanson de geste, the song of heroic deeds, says. But what is the history behind the legend?

How does a pair of plain, bare swords crafted over 600 years ago become a national symbol of freedom that persists even to the present day? The blades were not crafted by a master blacksmith, nor were they wielded by a fi erce warrior. In fact, these blades never even saw battle, though they did incite one - a battle that would decide the fate of nations - and the blades became an immortal symbol of victory and independence: the Grunwald Swords.

King Arthur. Two simple words that stir the imagination and the soul. And raise questions. Was there really an individual war-leader (not necessarily a king or bearing the name Arthur) who organized an effective resistance to barbarian invaders? If there was one leader, was he Roman, British, both, or - as some theories suggest - neither? How did he train and organize his forces? Exploring all of these questions and the many competing (and equally valid) theories would fill a book (and there are many such books available). Instead, this article will examine the early chronicles of the Arthurian cycle, and compare their content with the known military situation in sub-Roman Britain.

William of Kensham is one of the great unsung heroes of England. A guerrilla fighter who led a highly effective resistance against French invaders, his lack of noble status has left him bereft of the full recognition he deserves. Yet, in his own lifetime, he was an inspirational figure mentioned by the chroniclers of the day, who recognized his role in a largely forgotten war.

Theme: Filippo Donvito, 'A mysterious letter to the Christian West - The legend of Prester John'.
Illustrated by Milek Jakubiec.

Between 1155 and 1175 various versions of a strange letter passed through Europe's royal courts. They were addressed to the most powerful rulers of the Christian West - the two emperors, the Pope, and the King of France. The author called himself 'Prester John', and claimed to be the monarch of a virtually boundless realm stretching from Babylon to India, where contemporary scholars placed the Garden of Heaven.

A humble beginning, an outstanding physique, brave deeds, and a sudden violent end - the life of the Austrian condottiere and rebel Andreas Baumkircher (1420-1471) includes all the elements of a tragic hero. Despite his personal feud with the Holy Roman Emperor and his subsequent execution (a fate shared by his fellow military entrepreneur Albrecht Wenzel Eusebius von Wallenstein), Baumkircher is honoured, as one of Austria's 56 great commanders, with a statue in the entrance hall of Vienna's Museum of Military History.

Qasr al-Hayr (also known as Qasr al-Heir) East and Qasr al-Hayr West are twin structures, 200km apart, which lie to the east and west of Palmyra in Syria. Qasr al-Hayr means 'walled castle' in Arabic. Indeed, both structures resemble a Roman desert fort in plan - a rectangular space enclosed by defensive walls reinforced with towers. Their obviously defensive character, along with their architectural decoration and their location in the middle of the Syrian desert, caused much debate in the twentieth century. They were taken, on the one hand, for palaces, and on the other, for fortified outposts in the heart of a desert, by some as caravanserais, and by others as castles.

Richard III's brief reign in England was famously brought to a close in August 1485 by Henry Tudor at Bosworth Field. What is less well known is that Tudor was involved in another conspiracy two years earlier, which could easily have unseated the last king of the House of York. It was only Richard's quick thinking, as well as some luck with the weather, which ensured that Buckingham's rebellion, one of the most widespread conspiracies of the late medieval period, fizzled out without a single battle being fought.