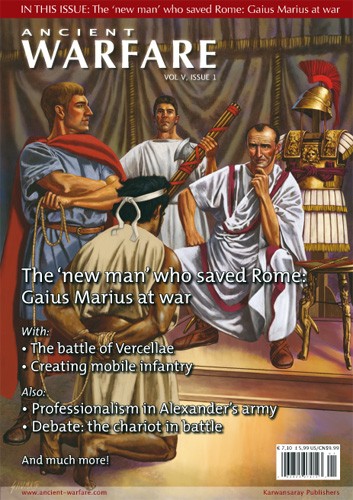 Marius' life spans a time when the old Republic struggles to adjust to the new realities brought by her dominion over the Oikumene, a time that inaugurates a long century of distress that finally would painfully give birth to the Principate under one Octavian - Augustus.

Gaius Marius narrated his autobiography with bones. He left the killing fields of Aquae Sextiae littered with thousands of unburied bones of Germanic men, women and children, but he did not leave a memoir written with pen and ink. He did not need to.

The reforms made to the Roman military by the general Gaius Marius in the last years of the second century BC dramatically changed the way in which the legions of Rome were recruited, equipped, organised and operated. The biggest logistical transformation to the Roman army resulting from Marius' reforms was in the size of the baggage train which accompanied a legion on the march and to the amount of equipment that each legionary carried.

The archaeological evidence for the first half of the first century BC is rare, especially compared to the relative wealth of material from the early Imperial era. Using a combination of single finds, evidence from earlier periods such as Numantia (153-133 BC) and pictorial evidence, we can come up with the best possible reconstruction according to the current academic status quo.

Theme: Sean Hussmann, 'The rise of a 'new man'. Noble rivalry and the career of Gaius Marius'

Politics are - almost by definition - a vicious business. While this is true for the times we live in, it is even truer for the conditions of late Republican Rome, where aspiring politicians ruthlessly furthered their own career whilst attacking their opponents at every opportunity.

Theme: P.Lindsay Powell, 'The last clash of the Cimbri and Romans'. Illustrated by Carlos de la Rocha and Igor Dzis

Having established at the battle of Aquae Sextiae in 102 BC that the much-feared Germano-Celtic Teutones and Ambrones could actually be defeated, Roman Consul Gaius Marius prepared the following year for a final showdown with their alliance partners, the Cimbri.

Theme: Paul McDonnell-Staff, 'The peg that would break - Marius and the Pilum: a roman myth'

Plutarch's anecdote of Marius' conversion of the pilum, written two centuries after the fact, along with several others in Roman literature, is often cited in support of the proposition that the pilum was designed to bend on impact. This disabled an enemy's shield and also ensured that the enemy could not throw the weapon back. However, the evidence does not support this hypothesis.

Theme: Duncan B. Campbell, 'A succession of sieges - Marius and the war with Jugurtha'. Illustrated by Angel García Pinto Climbing the mountain fortress- artwork by Angel Garcia Pinto

Marius' rise to prominence in Rome rested on his victories in Africa during the Jugurthine war. In all, Marius held the consulship seven times, an unprecedented feat. But the foundations of his success had been laid in Africa, during a war of sieges.

Hellenistic helmet from the Tigris Special: Michael Schmitz, 'Skill at arms - Professionalism in the army of Alexander the Great'. Illustrated by Johnny Shumate

"No tools will make a man a skilled workman, or master of defence, nor be of any use to him who has not learned how to handle them, and has never bestowed any attention upon them. How then will he who takes up a shield or other implement of war become a good fighter all in a day, whether with heavy-armed or any other kind of troops?". Alexander the Great's forces were a good example of the above ideal.

The debate: Murray Dahm, 'Tank, terror weapon or battle taxi - the role of the chariot on the battlefield.'

Everyone has probably read or heard some version of the urban myth about how the specifications of modern railway gauges relate to the distance between the wheels of the Ancient chariot. To most people, the myth is entirely plausible such is the power and fascination that the chariot holds. Whether it is from films like Ben Hur, The Ten Commandments or even Gladiator, most people think they know what chariots are all about; how they were used and how effective they were. The truth is we do not.