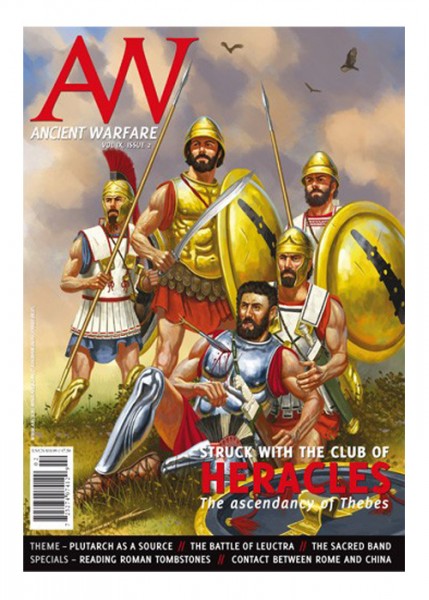 The women of Sparta screamed at the sight of the flames that raged just across from the bridge over the Eurotas. Their men were in a panic, rushing to prepare and defend the unwalled city. Fighting had broken out in the nearby village of Amyclae. Lacedaemonians were falling to the earth, dead. The soil of Sparta had been invaded for the first time in centuries. The mightiest warriors of Greece were at the mercy of a new order in the Hellenic world. Thebes had finally ascended to its place of power and control. All it needed to do was learn from the mistakes that Sparta had made.

Charming, wise, humane: Plutarch of Chaeronea (ca. 42-ca. 122) is one of the most accessible authors from Antiquity. He was influential, too. For centuries, no one dared to challenge his idea that the Greeks and the Romans were two nations with one culture. It's not untrue, but we must remain critical. His texts are not without pitfalls.

The architect of the Theban Hegemony was the brilliant philosopher- general Epaminondas. Theban ascendancy in Greece commenced in 371 BC with his crushing defeat of the Spartans at Leuctra and ended when he fell at Mantinea in 362. In the brief interim framed by these events, Epaminondas toppled the foundations of Sparta's military supremacy. Universal acclaim from ancient writers for the man who "won independence and freedom" for all Greeks (Pausanias 9.15.6) was epitomized by Cicero in two words, "Princeps Graeciae" (1.2.4): Epaminondas was "first among the Greeks."

The reenactor: Friedrich Wilhelm Miesen, "A hoplite at the dawn of Theban Hegemony - On the fields of Leuctra"

When night fell on the battlefield near the small Boeotian town of Leuctra, the might of the Spartan army had been crushed. The soldiers of Thebes stood triumphant over the scattered remains of a foe once thought invincible. While their enemy had been trained since childhood, the Theban hoplites were a classical city-state army. Aristocrats, merchants, and craftsmen, as well as peasants, filled their ranks instead of professional soldiers. It was their general, Epaminondas, who made the difference. His superior tactics and formidable use of the forces available to him paved the way for Theban predominance.

The defeat of Athens at the end of the Peloponnesian War (431-404 BC) may have left Sparta as the most powerful state in Greece, but the following years were troubled. The Corinthian War of 395-387 BC found Sparta warring with Thebes, Athens, Argos, and Corinth until peace was made under the auspices of the Great King of Persia. The political acumen of Sparta's rulers was severely limited, and they managed to turn Greek opinion against Sparta through their arrogance and brutish foreign policy. One ill-considered move was the seizure of the Cadmea, the acropolis of Thebes, in 382, which was then garrisoned by Spartan soldiers. The Spartan Hegemony, as it is known, was an imperial dominion underwritten by naked military power.

Theme: Matthew Beazley, "The Theban education of Philip of Macedon - Sowing the seeds of destruction"

The quick rise of Thebes as the dominant power in Greece obviously benefited the city in the short term. However, in the long term, the success of Epaminondas on the battlefield would plant the seed of the city's own destruction. Thebes' military success led to numerous governments sending their young nobles to the city as hostages, who were tutored in a variety of subjects, one of which was military drill and tactics. In an effort to curry favour, Ptolemy the Macedonian usurper, sent one such hostage to the city. His name was Philip.

Theme: Roel Konijnendijk, "On the dancing floor of Ares - The Battle of Leuctra"

The Boeotian victory at Leuctra was the most decisive event in Classical Greek history. Athens eventually recovered from her complete defeat in the Peloponnesian War, but Sparta, crushed in battle on the plain of Boeotia, was cast down for good. No Spartan army would ever again leave the Peloponnese. A power centuries old had been broken.

During the fifth and fourth centuries BC, some ancient Greek citystates fielded elite units of warriors. For the most part, Greek cities mustered their troops only when needed. Elite units, however, sometimes served all year round. Such 'picked' troops - the Greek word is epilektoi - were maintained either at the expense of the city or were rich enough themselves to dedicate their time and efforts to military pursuits. Of these elite units, one of the most famous is the Theban Sacred Band (hieros lochos).

Special: Joseph Hall, "From the spirits of the departed - Roman military tombstones"

The many histories, biographies, legal texts, and treatises which comprise the historical record tell us the majority of what we today know about the Roman military, with archaeology further supplementing this picture by providing evidence of the physical world within which the legions operated. But what of the soldiers themselves; where is their story told? Although brief and often fragmentary, it is through the words inscribed on their own tombstones that we see how these men lived, occasionally how they died, which deeds they wanted posterity to remember, and who mourned them after they were gone.

The debate: Duncan B. Campbell, "Did the Romans have links with the Far East? - Rome and China"

Writers and scholars have periodically flirted with the idea of historic links between Rome and China. There is no denying the obvious parallels between the two great empires, each run by a bureaucratic civil service and served by a professional army, poised to defend long frontiers against the barbarians beyond. However, there has been a tendency to assume that two empires of such sophistication must have maintained communications between themselves. So, is it likely that the Romans had links with the Far East?