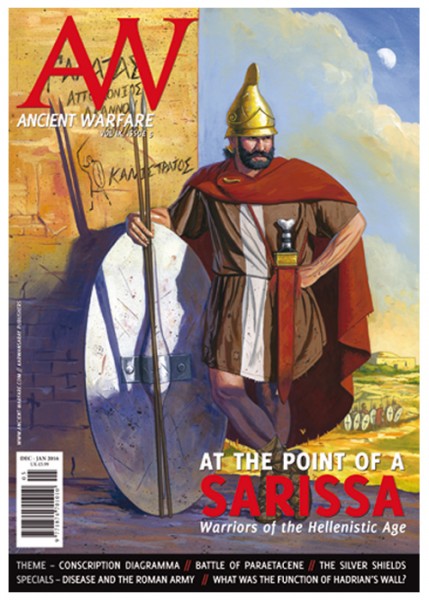 Theme: Paul Johstono, "At the point of the sarissa - Historical Introduction"

When Alexander fell ill at Babylon, he was lord of a massive but fragile empire and commander of a large, experienced army, but lacked a ready heir. On his deathbed, the warrior king was reported to have said that his empire should pass "to the strongest" (Arrian 7.26.3, Diodorus 17.117.4), anticipating the violent struggle for power that consumed subsequent decades.

Macedonia's position as a Hellenistic power rested on its ability to mobilize large national armies of tough Macedonian peasants. Indeed, it was only when Philip II began to muster a mass infantry army that Macedon was transformed from a weak and venal state into a major international player. The Antigonid dynasty (277-168 BC) inherited Philip and Alexander's military organization and recruitment patterns. Yet by the early second century BC, the Macedonian king desperately needed to raise troops to counter a new threat: Rome.

The elite hypaspist corps was a special unit, inherited by Alexander along with the other components of the Macedonian army. The importance of these troops, not only during the great battles of Philip and Alexander, has ignited the interest and curiosity of many scholars.

Theme: Andrew Hillen, "The rise and fall of the Achaean League - Citizen soldiers in the Hellenistic age"

The army of the Achaean League contrasts sharply with the royal armies that appeared after the death of Alexander. More than anything, the Achaeans represent the continued evolution of Classical citizen soldiers. In the war-riven world of Hellenistic kings, the League's citizen soldiers struggled to defend themselves with whatever strength they had. Though poorly matched against other standing armies of the time, these soldiers' efforts helped to birth a new type of Greek community.

Jewish service in armies of antiquity remains a matter rarely discussed, especially the case of armed service under Hellenistic rule. One of the reasons for the silence engulfing this issue, is due to the manner in which the Jews tend to remember the Seleucid Empire, one of the major kingdoms of the Hellenistic period. The Jews celebrate annually the Chanukah in commemoration of their victory over the Seleucids and the achievement of independence in the second century BC.

During the Cleomenean War (228-222 BC), Macedon under King Antigonus III. joined a coalition with the Achaean League against Sparta, which tried to restore its former hegemony over Greece for one last time. While the actual fighting was confined to the Peloponnesian peninsula it took several years until the coalition could claim victory. In 222 BC, the joined forces of the Achaean League and the kingdom of Macedonia marched into the homeland of their Laconian foes and achieved a decisive victory at Sellasia.

Theme: Sidney E. Dean, "The fight for Alexander's Asia - The Battle of Paraetacene"

The Battle of Paraetacene (or Paraitakene) was part of the greater power struggle among the Macedonian generals after Alexander the Great's death in 323 BC. Perdiccas initially became regent for Alexander's heirs, his mentally ill brother Philip III and Alexander's infant son Alexander IV . When Perdiccas attempted to marry Alexander's sister and thereby reachfor the crown himself, several rival generals led by Antipater rebelled (322 BC). Alexander's secretary Eumenes, now satrap of Cappadocia and Paphlonia, supported Perdiccas. This conflict, known as the First Diadochi War, ended with Perdiccas' death in May 320 BC and Antipater's rise to regent. The victors condemned Eumenes to death.

Alexander's hypaspistai (shield-bearers) performed a crucial role in Alexander's great set-piece battles of the Granicus River, Issus, and Gaugamela. Since the hypaspists were relied upon to maintain the Macedonian battle line as it attenuated, they probably carried equipment more suited for open-order combat, such as the 7-8 foot long dory, and the large hoplite shield, than was employed by the ordinary phalanx rankers, who wielded the lengthier, two-handed sarissa pike.The hypaspists most likely gained the regimental moniker Argyraspides, or 'Silver Shields', at the start of the Indian campaign in 327 BC.

Theme: Robert Holmes, "Defection and the Hellenistic soldier - To the strongest"

Our image of the Roman soldier is usually that of a strong, robust individual ready for work and for battle.Rarely, however, do we imagine a gaunt-faced legionnaire who awakes one morning from a feverish and fitful sleep with a tongue so swollen and dry that he is unable to speak. With disease having made him too weak to walk on his own, he has to be helped to the latrines. Having become too feeble to even stay upright on the wooden seat he soon collapses, face down, to the floor. He is later found where he had fallen, amidst the filth and the stench, dead. Succumbing to disease was far more likely for a legionnaire than being killed or wounded by sword or ballista bolt. Until very modern times it has been disease that has killed and made unfit for action more soldiers than any of the weapons of warfare.

The debate: Duncan B. Campbell, "Military defence or customs barrier? - the function of Hadrian's Wall"

Based upon the best selling novel by Thomas Costain, The Silver Chalice (1954) was Warner Brothers' attempt to cash in on the popularity of sword-and-sandal films kicked off by the success of MGM 's 1951 box office hit, Quo Vadis. However, almost from the opening frame it is clear that Warner Brothers and their director, Victor Saville, had no idea what they were doing.