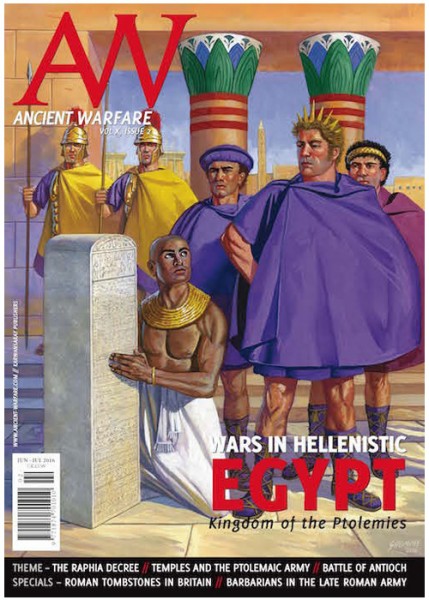 Egypt had been dominated by a foreign power since it fell to the Persians in 525 BC. When Alexander the Great conquered thePersian Empire in 331 BC, he founded the city of Alexandria as Egypt's new capital. After his death, one of his generals, Ptolemy Lagides - afterwards known as Ptolemy I Soter ('The Saviour') - took control of Egypt and founded the Hellenistic dynasty that would bear his name. This Ptolemaic Dynasty would last until Egypt was taken under Roman rule in 30 BC.

The Battle of Raphia was one of the greatest battles of the Hellenistic world (see Ancient Warfare IV.6). Ptolemy IV, otherwise known as a slothful alcoholic, played an unexpectedly large role, personally rallying his phalanx to smash the Seleucid centre. To celebrate the triumph, a group of senior Egyptian priests, no doubt with the palace's open encouragement and hearty approval, set up a series of commemorative stelae, written in Greek, Egyptian hieroglyphics, and demotic.

The Successor kingdoms all carried out military reforms in reaction to external threats. At the end of the third century BC, a new type of soldier appeared in written accounts. These soldiers were referred to as thorakitai ('cuirassed men') by ancient writers such as Polybius. They were heavy infantry employed in situations that would have been disadvantageous for a phalangite force.

During the ca. 300 years the Ptolemies ruled Egypt, the nation's military played a pivotal role in shaping the kingdom's economic development, as well as creating an ethnically more integrated society. During the second and first centuries BC, this relationship was marked, among other things, by the funding, building, and dedication of religious temples by officers and common soldiers alike of the Egyptian army.

The fleet of Ptolemy II Philadephus of Egypt (r. 283-246 BC) was an extraordinary assortment of ships. As reported by Athenaeaus of Naucratis in his Deipnosophistae, this remarkable fleet contained some 224 ships in the categories of quadriremes, triremes, and lighter vessels, but what is most arresting about the Egyptian navy is the high number of large, even giant, warships that Ptolemy II possessed.

Theme: Sidney E. Dean, "Road to Antioch - The beginning of the end of Hellenistic rule in the East"

The six Syrian Wars between the Ptolemaic dynasty of Egypt and the Seleucids of Asia Minor seriously weakened the Hellenistic kingdoms. This benefited Rome, whose intervention to end the final Syrian War in 168 BC left Egypt dependent on the Senate's protection. Continued inter-Hellenistic conflict in the decades following the Sixth Syrian War ultimately led to the loss of the Seleucid Empire's eastern satrapies, and paved the way for Roman dominance over Egypt and Asia Minor. One pivotal moment was the 145 BC Battle of Antioch.

In late 48 BC, Julius Caesar arrived in Alexandria in pursuit of his great rival Pompey Magnus. Though he was horrified to learn that the Egyptians had murdered Pompey, he was at the same time intrigued to discover the ruling Ptolemies in the midst of a dynastic civil war. The Alexandrians had no great love for their royal family, but they absolutely hated Roman interference in their affairs. When Caesar announced he was taking sides, the entire city rose up in revolt. The conqueror of Gaul suddenly found himself fighting a costly battle of survival in the streets of one of the ancient world's great cities.

Theme: Seán Hußmann, "War of words - Rome and Egypt in the age of Mark Antony"

We tend to think of political propaganda as a modern invention, a devious method devised by the Stalins and Goebbelses of the industrialized world to influence the masses, incite them against a common enemy and legitimize their own worldview. Propaganda, however, has been around since humans started to organize in political communities.

Special: Paolo Morisi, "In the name of the Roman Empire - Roman military tombstones in Britain"

Although the Roman army often prevailed, many of its soldiers died by the sword and their butchered bodies dotted the battlefield. Whether Roman soldiers died in battle or of old age they were often buried under colourful tombstones that, along with the remains of forts and artefacts, represent a vital source of information about their war machine. These monuments not only afford us a glimpse of what Roman soldiers looked like, but also help us understand the importance of combat and war in ancient society.

Generations of historians have often treated the large-scale recruitment of barbarians in the late Roman army as one of the root causes of the decline of the western Roman Empire. But evidence from both the literary and material sources for views on this so-called 'barbarization' of the field armies during the fourth century AD has been exaggerated and misinterpreted. On the contrary, the growing presence of barbarians in the Roman war machine did not diminish the Empire's status as a Mediterranean superpower.

Hoping to cash in on the success of Quo Vadis, rival studio Twentieth-Century Fox's entry into the epic genre was The Robe, an adaptation of a bestselling novel written by Lloyd C. Douglas. The Robe was also the first film to be released in the new widescreen Cinemascope process, marketed as "the entertainment miracle you can see without glasses" - a sly comment on the then-current vogue for 3D movies.