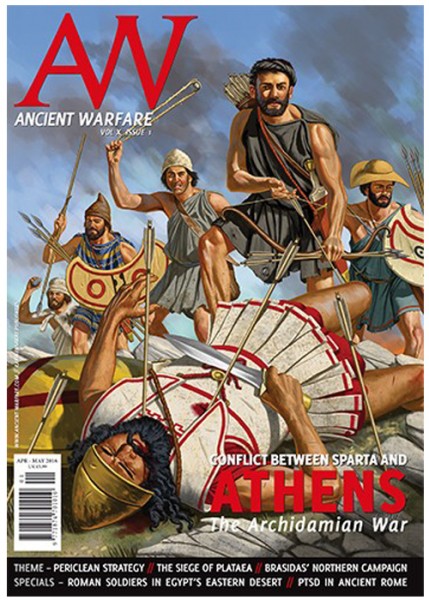 Conflict between Sparta and Athens

"Thucydides from Athens wrote the history of the war between the Peloponnesians and the Athenians, beginning at the moment that it broke out, and believing that it would be a great war and more worthy of relation than any that had preceded it. […] Indeed this was the greatest movement yet known in history, not only of the Hellenes, but of a large part of the barbarian world - I had almost said of mankind" (Thuc. 1.1).

Theme: Gareth Williams, "The strategy of Pericles - Pacifist or pragmatist?"

Was the Periclean strategy adopted by Athens at the outbreak of the war advocating a pacific or fundamentally defensive reaction to the Peloponnesian invasions of Attica? Could we consider Pericles to be naïve in concluding that the war could be won by such a scheme? Or, was Pericles far more astute in his approach?

Theme: Friedrich Wilhelm Miesen, "A new type of hoplite, for a new type of war - Fighting for Athens"

The origin of the Peloponnesian War is largely rooted in Athens ambition to gain control over the Hellenic world. An ambition that the city's arch rival, Sparta, could not tolerate. Like no other war before, the Peloponnesian war was fought with determined relentlessness. But armies in this conflict did not solely rely on well-armoured hoplite phalanxes.

The siege of Plataea was one of the main events at the beginning of the Peloponnesian War (431-404 BC). Thucydides' account of the siege became the first detailed description of a siege in the ancient world left by a historian. His interest in this very siege can probably be explained by the innovatory siege methods introduced by the Spartans.

Theme: Murray Dahm, "Talking the talk and walking the walk - Socrates at war"

Philosophers are not usually associated with military prowess. In ancient Greece, however, even philosophers had to take their place in the phalanx with their citizen-hoplite brethren. Socrates, arguably the most famous philosopher of all, went beyond just doing his duty and had a justly deserved military reputation. What is more, his military conduct is actually highly informative for Socrates the philosopher.

Theme: Owen Rees, "Brasidas and his northern campaign - The heart of Achilles"

At a time when Sparta was crumbling under the weight of its own fear, and Athens was able to haul the strongest military power over the coals - while still in recovery from the devastating plague that had decimated its own population - it was only Brasidas who stepped forward and offered a solution. In so doing, he embarked on the greatest solitary campaign to grace the Peloponnesian Wars.

The Athenian Acropolis served as the religious heart of the city during the Classical period. Its main temple, the Parthenon, is justifiably famous. However, there is also a smaller temple, located just outside of the main monumental entrance to the Acropolis that is just as interesting. It is the temple of Athena Nike.

Theme: Roel Konijnendijk, "The battle for supremacy on the Peloponnese, 420-418 BC - Clash of the Titans"

All the way through its war with Athens, Sparta kept a wary eye on a much older rival: Argos. For over a century, Sparta and Argos had periodically fought over land and influence on the Peloponnese. Since Argos' crushing defeat at Sepeia in 494 BC, Sparta was firmly on top - but Sparta's reputation and power had suffered in the Archidamian War, and an old truce between the two states was coming to an end. As Athens and Sparta discussed peace, Argos prepared for war.

The praesidium of Didymoi, one of several stations along the road from Koptos to Berenike, was founded by the prefect of Egypt, L. Iulius Ursus, who in the ninth year of the reign of Vespasian, while on the return leg of a journey to Berenike, gave instructions for a well to be sought in that place and, after it had been found, ordered a fort and cisterns to be constructed under the direction of M. Trebonius Valens, praefectus montis Berenicidis (I. Did. 1).

The debate: Joseph Hall, "Psychological trauma and the soldiers of Rome - A Roman PTSD?"

Much of the recent debate regarding whether ancient combatants suffered from Post Traumatic Stress Disorder has focused on the Greek hoplite, but what of the Roman legionary? Does evidence of PTSD exist in the Roman world too? And if so, how should this evidence be interpreted?

Director Don Chaffey enjoyed a long career in Hollywood, particularly on television where he directed multiple episodes for series such as The Prisoner, The Avengers, and Mission Impossible. He had a feel for television, a talent sadly not on display in his feature films. Besides Jason And The Argonauts, Chaffey's two other well-known films are One Million Years BC and The Viking Queen.