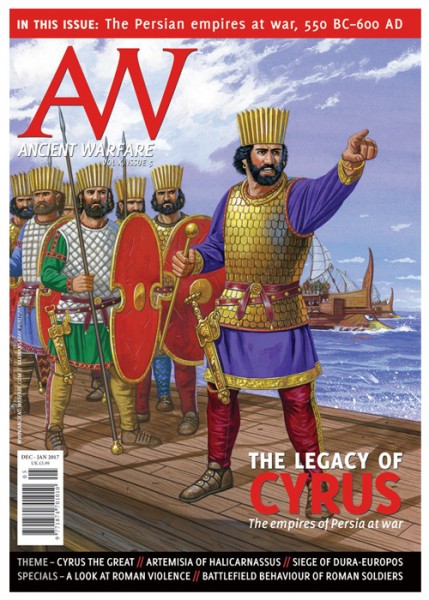 The empires of Persia at war

Medes, Persians or Achaemenids? Ancient sources rarely cared to differentiate them. Their tribes united and became kingdoms, and their kingdoms turned into empires. Some of the most decisive chapters of ancient warfare were written when their ever-changing borders brought them face-to-face with the great western powers.

Theme: Sidney E. Dean, "Cyrus and the conquest of Media - Beginning of Greatness"

Legend says that Median king Astyages dreamt that his daughter's son would overrun his realm. To prevent this he married his daughter Mandane off to a backwater prince at the edge of his realm. But legends teach that destiny cannot be cheated. The couple had a son named Cyrus who would indeed depose his grandfather and forge an empire greater than all that had come before.

Theme: Murray Dahm, ""My men have turned to women!" - Artemisia of Halicarnassus"

In his account of Xerxes' invasion of Greece, Herodotus goes out of his way to give an account of Artemisia - female tyrant of Halicarnassus - before, during, and in the aftermath of the Battle of Salamis. This account, and Artemisia herself, are remarkable for a variety of reasons, but the idea of a capable female commander had a great impact on the ancient world.

The Persians is a Greek tragic play written by Aeschylus and is also the only extant play besides the comedies whose subject matter is not taken from legend, but from recent Athenian history, i.e. the Battle of Salamis (480 BC). It provides the reader with the earliest account of the battle as witnessed by the playwright, who may also have been present at the Battle of Plataea (479 BC).

Achaemenid Persia was the classical world's greatest power, stretching from India to Egypt and across Asia Minor. Its nearly invincible armies comprised a mix of infantry, archers, and cavalry. The idea that hoplite warfare was superior, as marked by the Greek victory at Marathon, is called into question, as prior to that contest Persian armies won one battle after another against hoplites during the Ionian Revolt of 499-493 BC.

Dura-Europos - Hellenistic, then Parthian and Roman city - stood on the Euphrates, about 250km from Palmyra. Destroyed by the Sasanians in the mid-third century AD, Dura-Europos never revived and has been called the "Pompeii of the Syrian Desert" (Rostovtzeff). The dry climate and sand kept numerous rare artefacts well preserved: the siege ramp, a mine with the remains of warriors, weapons, wooden shields, and arrows for throwing machines. What will survive of this unique monument after the present war in Syria?

Whether as heavily-armoured cataphracts or as footmen, the armies of the Sassanid empire used archery to devastating effect in wars against such enemies as the Romans and the Huns. The methods of the individual Persian archers of Late Antiquity provide a fascinating glimpse into a martial art and sport that was held in great prestige by their society. Long after the Sassanid Empire succumbed to the Muslim conquests, they were remembered with awe and respect.

When, on the eve of the Battle of Gaugamela, in 331 BC, some of Alexander's companions saw the great many fires lit by the Persian host across the plain, they became afraid of confronting this vast army in broad sunlight. They counselled the king to attack the Persian camp under cover of darkness. But Alexander refused and said, "I will not steal my victory."

Until recently, academia has been in denial about the ubiquity of violence in ancient times. Even with attitudes now changing, however, the fact that violence has been ignored as a subject for so long means it is still a very under-studied field of enquiry. Few people would argue with the statement that the Roman Empire was created and maintained in large part by the use of force, so why has the study of such force - in all its contexts - received so little attention so far?

The debate: Robbert Bleij, "Roman heavy infantry on the battlefield - Lines and limits"

For as long as I can remember, I have been fascinated by the behaviour of human beings under pressure - not only in my personal life, but also as a student of history. My thesis Lines and Limits deals with the psychological and physical limits and possibilities of soldiers under stress in the period of the Late Republic and the Early Principate.

Given the legendary aspects of Thermopylae, it is surprising that Hollywood has largely ignored this seminal engagement. With the exception of a few documentaries, there are but two feature films to speak of: The 300 Spartans (1961) and, much more recently, Zack Snyder's film 300 (2006). "Quite a lively epic with some dignity," is how film critic Leslie Halliwell, with laconic brevity worthy of the Spartans, summed up The 300 Spartans.