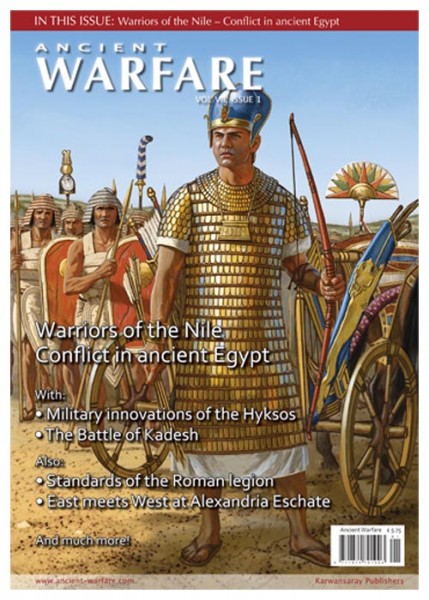 Theme: Warriors of the Nile - Conflict in ancient Egypt

One of the earliest civilizations in the world, the culture of ancient Egypt blossomed along the banks of the River Nile. Around 3000 BC, the country was already a unified kingdom ruled by a single king. Its powerful rulers built impressive monuments in the form of the famous pyramids during the so-called Old and Middle Kingdoms, many of which still endure to this day. Egyptian civilization would reach even greater heights during the New Kingdom (1549-1069 BC), when its warrior-kings ventured more boldly beyond the safety of their own borders to forge an actual empire.

Modern accounts of ancient military history are largely dominated by the study of Greek and Roman warfare. However, Egyptian military history provides a much neglected and fertile field of research. Texts, iconographic sources and archaeological finds of military equipment provide rich, if sometimes difficult sources of historical inquiry.

Theme: Arianna Sacco, 'The Hyksos and their contributions to Egyptian warfare - The "Rulers of Foreign Lands"'.
Illustrated by Rocío Espín.

The Egyptian Middle Kingdom (2066-1650 BC) was a period of political and cultural flowering. The central authority embodied by the king was strong. Successful military campaigns extended Egypt's borders. Fortresses were built in Lower Nubia on the banks of the River Nile to keep newly conquered territory under control; they also served as storehouses for goods traded in that region and as checkpoints for travelers. The arts flourished. The most famous works of ancient Egyptian literature were created in this period and represent the classical phase of Egyptian language. But the Middle Kingdom would eventually give way to the Second Intermediate Period (1650-1549 BC), during which Egypt was ruled by a group of people of foreign stock: the Hyksos.

Theme: Sigrid M. van Roode, 'Egypt's strategic border defences - From the "Walls of the Ruler" to the "Belly of Stones"'.
Illustrated by Julia Lillo.

"Year 22, fourth month of winter, day 25. His Majesty was in Tjaru on his first victorious campaign that his father Amun had granted him, in order to extend the frontiers of Egypt, in valour, in victory, in might and in justification." With these words begins the account of the campaigns of Pharaoh Tuthmose III (r. 1479-1424 BC) into Syria and Palestine. Egyptian accounts of military expeditions sent deep into Nubia in the south and Palestine and Syria in the northeast enumerate the amount of enemies slain, prisoners and cattle taken, cities conquered, pillaged and burnt. Most of these accounts do not linger on what was presumably regarded as common knowledge: the available military infrastructure from which to launch these victorious campaigns.

Ramesses II was the son of Seti I and ruled Egypt during the years 1279-1212 BC. He was a prominent ruler in the ancient world. He adopted the title, 'Usi-Ma-Re' ('Strong in right is Re'), along with the epithet 'Great in Victories'. His aim was clear: Ramesses had a passion for battle and for glory. He learned warcraft at an early age, and as a teenager, he fought in Nubia at the side of his father. Remaining true to his father's policies, Ramesses was keen to emulate Tuthmose III and determined to surpass the military accomplishments of his predecessors. In doing so, he would fulfil his obligations to Amun, the most prominent deity of New Kingdom Egypt, and establish a reputation as one of the great military rulers of the ancient world.

Theme: Paul McDonnell-Staff, 'The weapons of Tutankhamun - A pharaoh's arsenal'.

Luxor, Valley of the Kings, Egypt, 24 November 1922. Lord Carnarvon enquired anxiously of Howard Carter, "Can you see anything?" To which Carter replied, "Yes, wonderful things."

The Late Bronze Age was a remarkable period for the ancient Near East. Four large kingdoms existed that maintained, on the whole, a delicate balance of power between them. These were the kingdoms of Egypt, the people of the Land of Hatti (the Hittites), Babylon and the Mitanni. The latter kingdom was eventually swallowed up by a fifth Great Kingdom, Assyria, which emerged in the later stages of the Late Bronze Age. The rulers of these realms were all Great Kings, who referred to themselves as 'Brothers'. They wrote letters to each other that reveal much about the contemporary political and military situation.

Special: Jessica A. Billing, 'Symbolic objects of ideology, veneration and belief - The military standards of the legions'.
Illustrated by Nikolai Zubkhov.

The legions of the Roman army spark our imaginations, even today. The image of their armour, large shields, swords and cloaks are prominent to us and instantly recognizable, with their eagle standards blazing overhead as depicted in stone on the iconic Trajan's Column. The image of the eagle more than any other has lived on and been used by the likes of Napoleon Bonaparte centuries after the fall of the Roman Empire. But what did the eagle standard, and indeed the others, mean to the soldiers who carried them? What did they symbolize? Why were they venerated?

The Debate: J. Albert Morales, 'Could the Han Chinese have defeated the Macedonian army? - The War of the Heavenly Horses'.
Illustrated by José Antonio Gutierrez Lopez and Mark Churms.

Alexander the Great and his father Philip had created a combined arms force that maximized the lethality of heavy cavalry, armoured phalangites and peltasts. Alexander marched this army three thousand miles across Asia and stopped only a thousand miles from the only force that could have challenged him: the army of Imperial China.