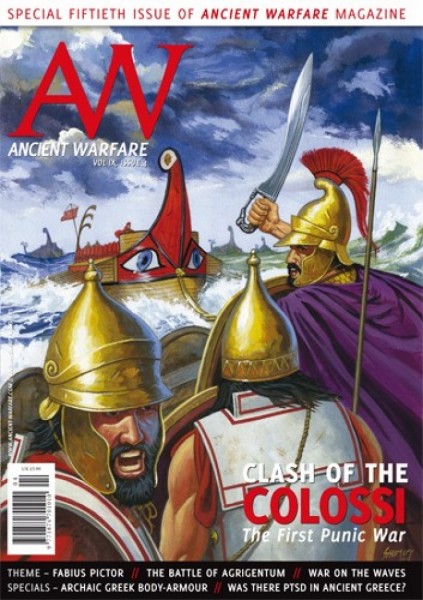 Theme: Cristian Violatti, "The point of no return - Historical introduction"

The First Punic War (264 to 241 BC ) was the longest uninterrupted war in antiquity and the beginning of a series of military conflicts between Carthage and Rome. During the struggle, these ancient powers fought for the control of Sicily, a strategic point in the central Mediterranean. In the end, Rome was victorious and Carthage lost Sicily.

Allegedly it all started with Polybius. Striving for a balanced view of the wars that had given rise to Roman supremacy, the Greek historian was - by his own account - the first to compile and evaluate the contradictory evidence. He drew on sources ranging from literary and documentary texts to monuments as well as oral tradition and, not the least, personal experience as an eyewitness to the latest events.Thus it was Polybius who, following in the footsteps of Thucydides and Herodotus, raised Roman historiography to universal Hellenistic standards - or perhaps not?

The First Punic War (264–241 BC ) is best known for the big fleets and sea battles, which first took place at Mylae in 260, and continued until the Battle of the Aegates islands in 241. The conflict escalated gradually, requiring more men and ships and also the introduction of a completely new line of ship in the Roman navy, the quinquereme. The purpose of this article is to shed light on the Roman operations in Sicily in 264–260, the gradual increase of their ambitions at sea, and the process that led to the building of the first big fleet.

War elephants were made famous when Hannibal used them during the invasion of Italy in the Second Punic War. However, these magnificent animals were used in far larger numbers by the Carthaginians during the First Punic War.

Theme: Seán Hußmann, "Elephants in war - Behemoths of the battlefield"

Throughout history, man has waged war on his fellow man. And throughout history, he made use of animals to reach his military goals. Be it horses, oxen, dogs, mules, even cats – there are few domesticated animals that were not in some way or other used for warfare. Perhaps the most magnificent beast that was employed in a military function was the elephant. Furthermore, this mighty animal is the only one that was not only used in a logistical role, but as an active combatant.

The siege and subsequent battle of Agrigentum on Sicily was the first major land engagement of the First Punic War. For both sides it was an educational experience, providing insight into the military capabilities and tactics of the opposing side. Rome ultimately won the confrontation at Agrigentum, but it was, in many ways, a Pyrrhic victory.

The find: Michael Taylor, "Archaeology from the Battle of the Aegates Islands - From the bottom of the sea floor"

In 241 BC , the First Punic War was stalemated, with the Romans maintaining a desultory siege of Punic forces near Mount Eryx. The Carthaginians, believing they enjoyed naval superiority after their smashing victory at Drepanna seven years before, did not maintain a major naval presence, even as they supplied their forces in Sicily by sea. When the Romans surprised the Carthaginians by deploying a new fleet, the latter hastily dispatched a naval relief force. As the Punic fleet prepared to sail on its last leg to the Sicilian coast, Roman warships, lying in wait behind the Aegates (now Egadi) Islands, pounced. After a sharp naval engagement, the Romans won a decisive victory, effectively ending the war.

Although the concept of the battle speech as a distinct historical genre can be traced back to Homer and Herodotus, it was Thucydides who set forth the conventions future historians would seek to emulate. According to these conventions, the battle speech had to both keep to what was said and what was probably said given the situation; they also drew heavily on such themes as the nobility of giving one’s life for their country, earning the favour of the gods, and crossroads where one must vanquish or die. The Thucydidean battle speech conventions were later employed to good effect by Polybius in his account of the First Punic War.

Theme: Joseph Hall, "The Battle of Cape Ecnomus - War on the waves"

In 256 BC , Rome’s strategic plan for how the war was to be won involved a direct landing in Africa itself. To this end, scores of legionaries embarked upon ships laid on for the voyage. When the enormous fleet finally set sail each ship was crowded with men and materiel for the coming campaign, and included both consuls themselves. En-route to Africa however, the fleet encountered the vast navy of Carthage near Cape Ecnomus, south of Sicily. With over a quarter of a million men reputedly aboard close to seven hundred ships, the titanic engagement that followed has gone down in history as the largest naval battle ever fought.

The war between Rome and Carthage for the mastery of the western Mediterranean had arrived at a tipping point by the year 255 BC . Since 264 BC, the conflict on land between the two republics had revolved around control of the island of Sicily, the wealthiest and most strategically placed spot in the entire region due to its geographical position in the centre of the Mediterranean Sea, and the fact that it served as a bridge between Africa and Europe. A plan by the Romans to switch the centre of gravity of the ground war from Sicily to Africa resulted in an unanticipated Roman battlefield defeat and added years of fighting to the First Punic War.

The find: Josho Brouwers, "A gilded bronze cuirass from a Punic grave - The beautiful body"

Earlier in 2015, the National Museum of Antiquities in Leiden, the Netherlands, organized an exhibition on Carthage. A large number of beautiful artefacts were transported from Tunisia to be exhibited in the museum, including a beautiful example of a cuirass that not only highlights the splendour of the Carthaginian war machine, but also its cosmopolitan nature.

Fiction: Marcus Pailing, "We left our dead at the Polytimetos"

We watched the barbarians from the walls of Marakanda. They preened and postured, making their sturdy mounts prance and wheel as if in a dance- it was like a savage mating ritual, even. Yet this was no mere entertainment. Instead it was a challenge, and we all knew it.

When we think of Greek hoplites, most think about the typical Classical hoplite with a Corinthian helmet, a cuirass, greaves, and shield. While the hoplite dominated Greek infantry warfare, this type of soldier underwent significant equipment changes over time. However, most reenactors choose the Persian Wars period for their impressions, with only a handful going for a later Classical kit and even fewer exploring earlier phases of hoplite warfare. But exploring these earlier stages in particular offers a fascinating journey.

The debate: Owen Rees and Jason Crowley, "Was there mental trauma in ancient warfare - PTSD in ancient Greece"

For over fifteen years it has been an accepted historical practice to refer to episodes within ancient Greek history, and portrayals of characters in Greek drama, as exhibiting behaviours akin to modern veterans suffering with Post-traumatic Stress Disorder (PTSD ). Indeed, it is becoming more and more common that figures from ancient history are being retrospectively diagnosed with PTSD. Yet, to date no book length treatment exists to debate the validity of this implied universalism: that PTSD can be found and equated in history, with little regard for the social and chronological boundaries that separate the present from the past.

Hollywood Romans: Graham Sumner, "The Roman army on screen, part 2 - Quo Vadis (1951)"Caesar and Cleopatra (1945) had been a vain attempt by the British film industry to take on Hollywood. However, in the next decade Hollywood itself was indeed under threat, not from Britain but from the rapid rise in popularity of television. Hollywood believed that big budget blockbuster films set in ancient Rome made with the very latest film and sound technology, shown on extra large screens, were one answer to win back audiences. Consequently, the 1950s ushered in a golden age of epic movies.