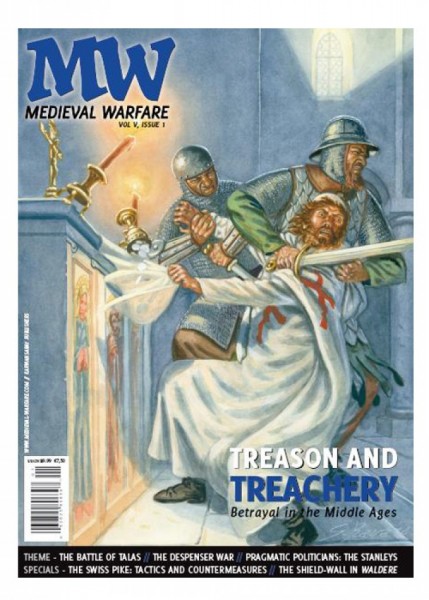 Theme: Treason and Treachery - Betrayal in the Middle Ages

The new year has begun, which means that a new issue of Medieval Warfare has been finished. Volume V starts with a theme which might be familiar to some of you who also read our sister magazine, Ancient Warfare: Traitors and Treachery. A while back, my colleague came up with this idea, and we soon agreed to do an ancient version first, and a medieval one not soon thereafter. The character of the theme allowed us to cover differing topics throughout the whole of medieval history, across Europe and the Near East, and I must say, I'm very happy with the selection of articles we have chosen.

After a light introduction, Kenneth Cline starts the issue's theme by taking a close look at perhaps the most illustrious family in Byzantine history: the Doukai. By showing how several members of the Doukas family made clever use of Byzantine court politics, which included betraying their adversaries several times, Cline provides us with an enlightening image of how Byzantine politics was perfectly suitable for ambitious and treacherous aristocrats. In the end, the actions of a few Doukai may very well have altered the course of Byzantine history forever, setting them on a course to ruin. The next article, written by Martin Dougherty, focuses more on an overview of medieval siege tactics; more specifically, he touches upon several of the more unconventional methods used to take a fortified city or stronghold. Through several acecdotes, Dougherty teaches us that sieges were not always a matter of attack or starve; castles could easily be lost through mutual agreement, falsified orders, and - of course - treachery from the inside. This is followed by Nils Visser's account of politics in the low countries at te beginning of the fifteenth century. While medieval politics may have been dominated by men, that does not mean that women played no part (as we have already seen in Medieval Warfare IV-2). In fact, because of the nature of medieval politics, women might have been even more susceptible to political betrayal than men. Visser describes how this was indeed the case with Jacqueline of Hainault, who found herself stabbed in the back by family and husbands alike.

While the focus of this issue clearly lies on events closer to Europe, Filippo Donvito takes us much further, all the way to the borders of the Chinese Tang Empire. While actual Asian warfare is not something we're planning on covering in detail in Medieval Warfare, the clash between the Near and Far East is still of importance to our European/Middle-Eastern focused approach. After all, the result of such conflicts may very well have had an impact on battlefield closer to our topic. Such seems to have been the case with the conflict between Tang China and the Islamic Abbasid Caliphate. In the end, it was the Tang Empire which would be defeated; not directly by conventional tactics, but through the mass-betrayal of the Chinese Turkish auxiliaries. Donvito explains the historical background, ending with the course of the clash between east and further east: the Battle of the River Talas. With the Far East covered, regular contributor Sidney Dean takes us back to English politics, discussing the Despenser War and the way King Edward II betrayed, and was in turn betrayed by, his nobles and allies, including even his wife, Isabella of France. Events surrounding the Despenser War opened the way for the rise of Edward III, who finally had to turn against his own mother and take control of the country through force. Last but not least - theme-wise - comes Joseph Hall, with his article on perhaps the most famous of medieval traitors: the Stanley family. Hall explains how the Stanleys, while starting out as a minor family, managed to rise to the top through marriage politics and, most importantly, a clever use of political manoeuvring and backing the right claimant. Thus, they managed to survive English politics during the chaotic events surrounding the Wars of the Roses; in fact, they were to prove instrumental in deciding who would finally win the throne.

As for non-theme articles, we have once again provided a varied selection. We start with a rather unconventional article, as Morgan Kuberry discusses some of the problems one encounters when moving a large collection of medieval objects from one museum to the next. He does so based on his experiences in moving the collection of the Higgins Armory Museum (USA's second largest collection of arms and armour) to their new home at Worcester Art Museum. The next non-theme article is written by specialist Olivier Bangerter. While Swiss units and some of their weapons have been discussed before in Medieval Warfare, we felt that it was time to shed more light on perhaps the most important weapon in their arsenal: the pike. In his article, Bangerter covers the most important aspects, including not only shape, size, and tactics, but also those countermeasures which would finally break the pike's dominance on the medieval battlefield. Murray Dahm closes this issue with his The Debate-like piece on the possible reference to shield-wall tactics in the Anglo-Saxon poem Waldere. Lastly, Gareth Williams explains the scene on the cover, discussing an event which is actually the origin of our own Friday the 13th.