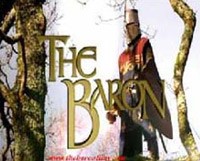 and around Talsarnau, Gwyned, North Wales. The film is now ready and classified

as a PG. As mayhem engulfs merry old England the king sends for his knights to

stop the raids ,what ensues is a clash of hysterical history and medieval mayhem,

join the valiant sir Percivere as he battles his way though this medieval comedy of errors.

to rescue you? The film was shot in and around Gwynedd north Wales, in the small

village of Talsarnau near Porthmadog.


All the Extras, Armour and Actors were employed locally, with hospitality provided

by the Ship aground Talsarnau.


The film it self is the first on a mini series, and on release of The Baron the

with in the year.


A feature film is also planed this will go head when commissioned, The Baron is

intended as a medieval comedy filmed with family viewing in mind. It is intended

as a tongue in cheek medieval romp.