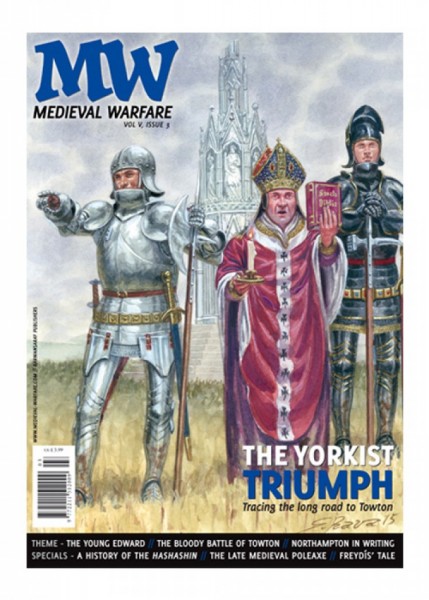 Theme: Triumph for the Yorkists

Theme: Erich B. Anderson, "The rise and fall of Queen Margaret - Triumph for the Yorkists"

During the reign of Henry VI , the Kingdom of England plunged into chaos: the economy deteriorated and nearly all of the imperial conquests made in France were lost. By the 1450's, the Duke of York could no longer stand the declining state of the Kingdom and was resolved to remove those he thought responsible: the King's 'evil' councilors. His actions greatly threatened the court faction, especially Queen Margaret, who would stop at nothing to protect her son's inheritance. The Wars of the Roses had started.

Theme: Andrew Lavoie, "A war-captain of the House of York - Lord Fauconberg"

The Wars of the Roses has its fair share of unique and intriguing personalities. The historiography of the early period of the Wars of the Roses is usually dominated by discussions and analysis of the central figures of the conflict. William Neville, Lord Fauconberg, is one of the most overlooked commanders of the period, and his service to the Yorkist cause is due for a reexamination. Fauconberg was one of the last surviving field commanders from England's war against France and his service and expertise in France were to prove of vital importance to the success of the Yorkist cause in the bitter winter of 1460-61.

The city of Calais was of enormous military significance during the Wars of the Roses. Whoever controlled the city and garrison controlled the largest and most experienced permanent military force in the English realm. Also, they had a fortified and secure base from which to gather resources and attack their rivals.

Theme: Mike Ingram, "The Battle of Northampton - War in writing"

The Battle of Northampton, fought on 10 July 1460, may be one of the lesser-known battles of the Wars of the Roses, but it ranks alongside Towton, Tewkesbury and Bosworth in importance. It was the first time that artillery was used en masse in England and the only time a field fortification was assaulted during the wars. It was also the only time a whole army was excommunicated in the wars, and, in the immediate aftermath, the Yorkists publicly laid claim to the throne of England for the first time.

King Edward IV was the most successful commander of the Wars of the Roses. His opponents were tenacious, and he sometimes made mistakes, but he ultimately died in his bed, undefeated in battle. This article tells the story of his early career, covering the years before his accession and the campaign that enabled him to take the English throne. Even though he was still only eighteen at the time of his great victory at Towton, which confirmed his royal title, Edward had already managed to establish himself as a charismatic and ef fective leader.

The longest and perhaps most ferocious battle of the Wars of the Roses was fought just south of Towton, a village near York. It has even been called the largest and bloodiest battle ever fought on English soil, with perhaps as many as 30,000 casualties. Terrain and weather (in the form of a late season blizzard) were significant factors shaping the outcome of this decisive engagement which secured Edward IV 's place on the English throne.

The weapon: Brian R. Price, "The changing face of warfare - The poleaxe"

Of all the medieval staff weapons, the poleaxe played a unique historical role as both a weapon of the aristocratic knight and of the rising non-noble infantry combatant. It was used on the battlefield and in chivalric duels; it was illustrated by fight-masters in Germany, and its use was described by Burgundian chroniclers.

During the earlier phase of the Wars of the Roses, the Lancastrian defence of Wales fell in the hands of Jasper Tudor, who tried to hold out against the Yorkists. In 1468, Jasper allied himself with a local warband leader, Dafydd ap Siencyn, and moved to attack the Yorkist stronghold of Denbigh Castle in North Wales. What role did Jasper Tudor play in this and earlier Welsh affairs connected to Denbigh and how successful was this interesting alliance?

Special: James Gilmer, "The rise and fall of the Hashashin - Blood and sand"

It was a quiet summer day when the Castellan of Alamut, Mahdi, received an apparently unassuming schoolteacher. This teacher soon turned out to be none other than Hassan ibn Sabbah, mastermind of a dangerous new religious movementthat was sweeping Persia. When Mahdi called his guards, Hassan merely smiled and informed the Castellan that his services were no longer needed. Alamut had fallen; the rise of the Hashashin had begun.

When people imagine a Viking, they immediately picture images of large, muscular men equipped with axes and blades almost as fierce as their mighty fiery beards. However, it seems that some Viking women chose the path of the warrior as well.