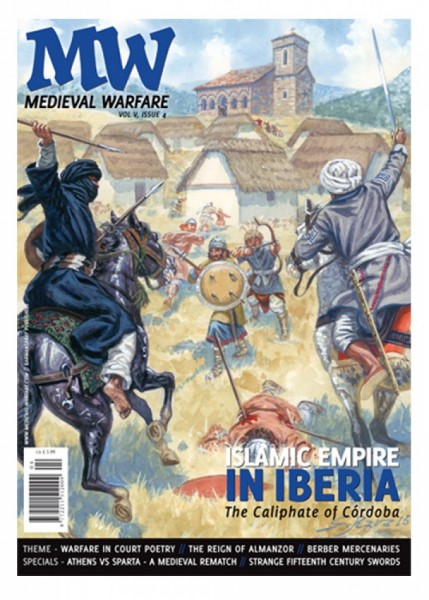 The Caliphate of Córdoba

After the dust settled on the blood-soaked fields of Tours, Arabic commanders led their forces back across the Pyrenees, perhaps content that they were still the undisputed rulers of their newly conquered territories in the Iberian Peninsula. In the realm of Al-Andalus an era of unique cultural infusion developed alongside a constant conflict for dominance. Although tolerant and independent, Al-Andalus was far from harmonious and the Umayyad provincial establishment was simply the beginning of the struggles for political legitimacy, the battles for military supremacy, and a tide of glory that would ultimately crest in the victorious campaigns of one powerful general.

The source: Murray Dahm, "The court poets of the Adb-al Rahman - The best of men"

The importance of poets and poetry for medieval military history cannot be overestimated. Although we often rely on other forms of writing and evidence, it is the poetry that was composed at the time and after which can, with a thorough examination of the intricacies of all the various contexts, provide us with a very real picture of what historical personages or cultures considered important.

Early Moorish Iberia was far from monolithic. Disaffected lords and interest groups arose with regularity to challenge the central government in Córdoba. One of the most powerful challengers was 'Umar Ibn Hafsun, who rose from bandit leader to overlord of a major insurgency, extending his control over a large portion of southern Spain during the late ninth century.

Theme: Nicola Bergamo, "The rise of Al-Mansur Bi-llah - The Battle of Torrevicente"

The Battle of Torrevicente (981) was the final episode of a long fratricidal war. An army led by Abi 'Amir (938-1002) defeated the rebel forces commanded by Galib ibn Abd al-Rahman (d.981). On his victory Abi 'Amir became Al-Mansur Bi-llah (more commonly known as 'Almanzor'), "Victorious by God", and as a direct consequence of his military success, the uncontested leader of the Al-Andalus.

Theme: Carlos Dominguez, "Almanzor against the Christian Kingdoms - Leader of the Jihad"

With the defeat of Galib at Torrevicente, Abi Amir Muhammad ibn Abddullah, now known as Almanzor (Al-Mansur, the victorious), was the only strong man left in Córdoba. He rapidly undertook a series of campaigns against the Christian kingdoms of the north, unprecedented in scope and degree of devastation.

Despite the many conflicts that erupted between the various different ethnic groups who fought in the armies of al-Andalus,the Umayyad rulers managed to stay in power for nearly three centuries until the end of the Caliphate of Córdoba in 1031. At first, the ferocity of the numerous Berber warriors combined with the elite Arab soldiers from the former Umayyad Caliphate created a lethal force unrivaled in Western Europe. The later shift to a more organized professional army comprised primarily of North African mercenaries and slave soldiers was just as deadly, but the decreasing native participation in the military had disastrous consequences.

The Nizari Ismaili sect, known today as the Assassins, emerged in Iran among militant Ismaili in the eleventh century, when Syria was torn to pieces by fighting between the Fatimids, the Seljuq Turks and the Byzantines. Making use of the situation, the Assassins quickly spread their influence over Syria, acquired a number of castles there, and in the twelfth-thirteenth centuries kept the whole region in awe, playing complicated political games with the Crusaders, Seljuqs, Fatimids, Ayyubids, and Mamluk sultans. A net of castles built by the Assassins in Iran and Syria allowed themto remain independent and keep control over the territories during the following two centuries.

Special: Philippo Donvito, "The War of the Euboeote Succession - Athens vs. Sparta"

The Fourth Crusade is quite often recounted as a single, almost extraordinary, episode in the history of the Crusades. And yet, following the sack of Constantinople, the Franks invaded Greece and gave rise to a number of principalities, as had happened a century before in Syria and Palestine. In an irony of fate, the most notable of these newborn crusader states were the Frankish lordships of Athens and Sparta.

From the chivalric culture of fifteenth century Germany and Italy emerges an intriguing collection of manuscripts that documents the equipment and techniques employed in hand-to-hand combat. On the pages of these books we find images of swords very different from those usually wielded by a medieval knight. Were these strange weapons intended as prototypes for specialty fighting swords, or merely as conceptual curiosities envisioned by the maestros who made their living teaching the art of defense to duelists, knights, and princes of the late Middle Ages?