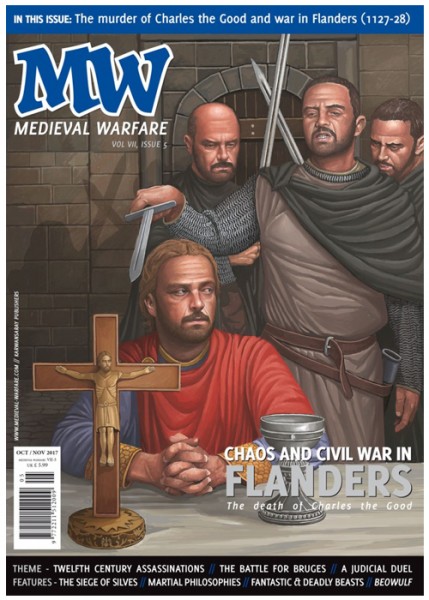 The County of Flanders erupts into civil war after Charles is killed. As Bruges falls into chaos, the fight to become the new count begins.

Theme: The murder of Charles the Good

- Peter Konieczny, 'How Flanders descended into civil war - A murder, a siege, and too many successors'.
- Jeff Rider, '"Let's kill him in the church" - A medieval model for murder'.
- Steven Issac, '"Vigils, fights, attacks, and other tasks" - In Bruges goes medieval'.
- Peter Konieczny, 'The war according to Herman of Tournai - Chaos in Flanders'.
- Erich B. Anderson, 'The rise and fall of William Clito - The Siege of Aalst'.
- Jeff Rider, 'The chronicler and the historian - My friend Galbert'.
- Peter Konieczny, 'Further reading - Books and articles on Charles the Good'.

- James Titterton, 'The "rules of the game" - Deception in siege warfare'.
- Kay Smith and Ruth R. Brown, 'The sword in the bog - Forged by a god, foretold by a wizard, found by a king'.
- Jacob Henry Deacon, 'A salty brain and climbing stairs - Filippo Vadi's martial philosophies'.
- Danièle Cybulskie, '"The earth is a source of wonder" - Fantastic beasts and how they kill you'.
- Danny Lake-Giguerre, 'A failed French expedition against England - The portable "wooden city" of 1386'.
- Dana Cushing, 'Attacked "with siege-engines and arrows" - The Siege of Silves in 1189'.
- Murray Dahm, 'Chasing the monster - Beowulf on film'.