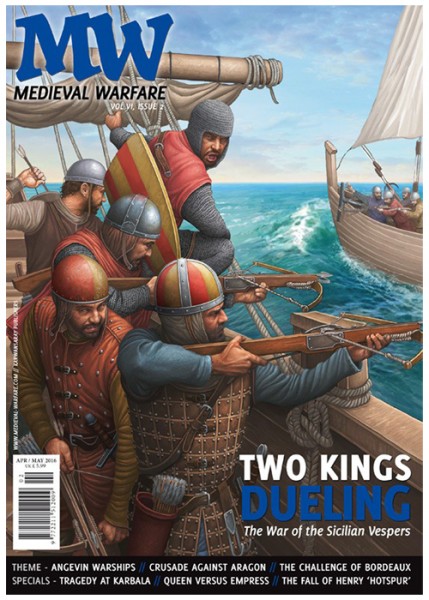 The War of the Sicilian Vespers

The immediate cause of the War of the Sicilian Vespers was a comparatively innocent incident: a Frenchman harassing aPalermitan woman. The truest cause, however, was the growth of Hohenstaufen power, and the fear it br ought to the Papacy.

The fighting that ensued in the wake of the Sicilian Vespers included several important naval battles. Sicily, France,and Aragon/Catalonia all put fleets to sea, and so did the Angevins of Naples and Provence, who had spent much of the 1270sand 1280s building a large number of war galleys for their fleet prior to the outbreak of war.

Theme: Arnold Blumberg, "An unjust and unnecessary enterprise - The crusade against Aragon"

As an episode in military history, the crusade against Aragon in 1285 is scarcely worth noting. It produced no great battles,no innovations in strategy or tactics, and no significant alterations of frontiers. The whole campaign can be summed up ina modified version of the old nursery rhyme: The King of France, with eight thousand men, marched into Spain, and thenmarched out again. It was the last episode of an old custom: the crusade as a tool to enforce papal power.

The War of the Sicilian Vespers began as a local revolt against foreign occupiers. As the conflict spread, most of the warwas fought at sea between rival foreign powers. Local Italian and Sicilian armies played only a minor role in the conflict.When viewed in the context of the general military decline of the region, the reasons for this reliance on naval power andforeign armies become clear.

Count Charles of Anjou invaded the Kingdom of Sicily at the head of a Franco-Italian army in 1266 to assist the Papacy inexpelling the Hohenstaufen dynasty from the Italian peninsula. After accomplishing this objective, Charles initially ruledhis new kingdom with benevolence. But his darker side emerged when a Hohenstaufen prince challenged him in 1268, and hisSicilian subjects took up arms against him. Afterwards, Charles ruled with a heavy hand, imposing high taxes on his subjects.Because of this, it was only a matter of time before rebellion once again rocked the kingdom.

Although some areas of this fresco are no longer present, we are fortunate that the majority of the knights' bodies - andtherefore their armour - are preserved. Assuming that the artist has chosen to represent the two combatants in reasonablyaccurate fashion, what does this piece of art contribute to or confirm about our understanding of battle in the latethirteenth century?

Theme: Alberto Raúl Esteban Ribas, "Peter of Aragon versus Charles of Anjou - The Challenge of Bordeaux"

Sometimes history provides a glimpse of epic moments in which the gallantry of arms is demonstrated through the courage andhonour of soldiers and knights fighting for their faith, their king, or their country. However, at other times cunning orbetrayal overrule bravery. In 1283, an incident known as The Challenge of Bordeaux could have been an opportunity for theglory of chivalry to shine brightly, but unfortunately, this event would have anything but a glorious conclusion.

In AD 680, near Karbala in present day Iraq, a skirmish took place between two Arab armies. Even though it resulted in thedeath of only 72 warriors on the losing side, one of their number was the prophet's grandson, Hussain, which makes thisrelatively small battle still relevant for today's Islamic world: it marks the beginning of the rift between Sunnites andShi'ites. Unfortunately, only a few facts can be established with any certainty. To establish the those facts and understandwhy the death of Hussain had such an impact, we must first understand the events leading up to this skirmish.

Special: David Balfour, "A queen and an empress at odds - The War of the Two Matildas"

The medieval period offers numerous examples of women who directed significant military operations. Noteworthy was thesituation in 1141, when the Empress Matilda and Matilda of Boulogne faced off in a desperate, high-stakes clash known asthe 'War of the Two Matildas'.

The Castle: Jonathan Sneddon, "The Siege of Caerlaverock Castle - The gateway to England"

Caerlaverock, Lochmaben, and Threave Castles were the main defenses along the Scottish-English border. Caerlaverock Castlebordered northern England across the Solway Firth, about nine miles south of the town of Dumfries. Caerlaverock wasconsidered impregnable. Author, participant, and Franciscan monk Walter of Exeter wrote: "Caerlaverock was so strong acastle that it feared no siege before the King came there." King Edward I besieged and took the castle in two days!

The battle: Mike Ingram, "The Battle of Shrewsbury - A brave defiance"

Henry Percy, Earl of Northumberland had supported King Henry IV, when he usurped the throne from Richard II in 1399.With his son Henry, better known as 'Hotspur' and brother Thomas, Earl of Worcester he had supported the rebellion of OwainGlyndwr, and the border war with the Scots. In return for their support, the King promised land, money and royal favour.However, it was soon apparent that the King was nearly bankrupt and began to expect his nobles to fund the campaigns againstthe Scots and Welsh themselves.

Ask someone to think about medieval warfare in film and, after naming examples like Kingdom of Heaven (2005),Braveheart (1995), or perhaps Henry V (1944 and 1989), films depicting King Arthur will not be far away.We are in the middle of a boom period for depictions of medieval warfare - from new films and television series likeThe Last Kingdom or Vikings to fantasy worlds grounded in a medieval reality such as The Lord of the Rings,The Hobbit or Game of Thrones franchises. The problem, however, is that there are different ways to create a medievalfilm with different results. King Arthur films are a great source to explain that issue.

The most famous leaders of the first Scottish War of Independence against England (1296-1328) were William Wallace(i.e. 'Braveheart') and Robert the Bruce. The two men came from different backgrounds, had different personalities andagendas. They were at times allies and at times enemies. Both adopted a similar, insurgency-based strategy against theEnglish army. But the men themselves are a study in contrasts.