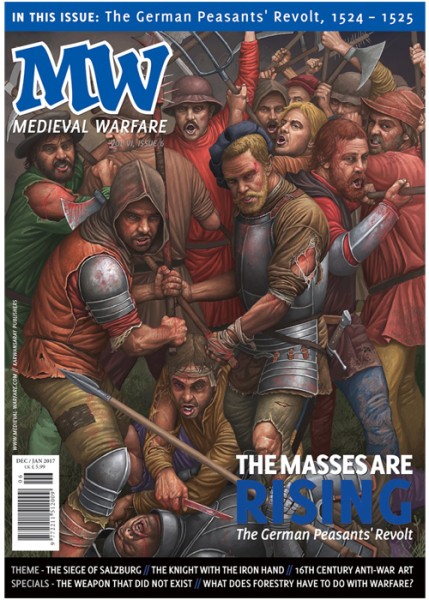 Theme: Kelly DeVries, "A look at the German Peasants' Revolt - Lucifer and his angels"

Why would peasants revolt? The answer once given by historians influenced by Marxist economic and historical thought was that they were oppressed by those who, in a pre-industrial historical context, essentially "owned" them. This ownership gave these "lords" the right to determine an almost daily regimen of hard agricultural work for their peasants, whose only respite came fromthe times they were worshiping in their churches or involved in Church "holy days" and other activities. The peasants were simply revolting against this oppressive enforced labor.

Early in April 1525, the peasant army known as the Lake Band stormed throughout Upper Swabia, seizing a considerable number of precious castles from their aristocratic enemies. Led by Dietrich Hurlewagen of Lindau and Hans Jacob Humpis of Senftenau, the formidable band of peasants originated near Rappertsweiler at Lake Constance with 12,000 armed men. The large and well-equipped force met little resistance until the morning of 15 April, when the 7,000 troops of the Swabian League confronted them outside of Weingarten. At first, the two sides exchanged artillery fire, but then instead of ordering an attack on the peasant troops, the League commander, Georg, Truchsess von Waldburg, made a tactical retreat behind the village of Gaisbeuren. By 17 April, the Truchsess still refused to fight a pitched battle and decided he would rather sign a treaty with the Band, for one major reason: the many Landsknechts within its ranks.

Theme: Jean-Claude Brunner, "The Prince-Archbishop vs. the people - The Siege of Salzburg"

In July 1525, the Prince-Archbishop of Salzburg looked down from the towering fortress of Hohensalzburg on his angry subjects in the city below. Would the relief force, led by the famous father of the Landsknechte, Georg von Frundsberg, arrive in time?

Faithful knight, oath breaker, robber baron, incorrigible feudmonger, mercenary, landlord - Götz von Berlichingen was all of these things. In 1525 he added insurgent leader to his list of sobriquets, becoming captain and commander of one of the largest people's armies of the P easants' War.

As the Middle Ages came to a close, artists were pushing past boundaries to take their work into new mediums and exploring new themes. Some were now eager to show us both the absurdity and horror of warfare as they saw it. What they produced was both astonishing and profound.

The source: Murray Dahm, "Engels on the German Peasants' War - Through modern eyes"

Friedrich Engels' Der Deutsche Bauernkrieg (The Peasant War in Germany) was first published in 1850, inspired by the recent events of the 1848 revolution in Germany. Engels saw parallels between the two events and considered that the same forces (socio-economic and political rather than religious) were at play. It became, and has remained, the most prominent history of the war, but it must be read with caution.

Historians have increasingly been examining the logistics of medieval warfare. For example, armies needed timber to build everything from ships to crossbow bolts. By the late Middle Ages the demand for this wood would be so great that governments had to figure out ways to manage their supply.

The weapon: Paul B. Sturtevant, "The medieval weapon that never existed - The military flail"

Anyone interested in the Middle Ages - from amateur to professor - likely knows what a military flail is. It's one of the most iconic weapons of the period. It has a short handle (about the length of a forearm), a long chain and a spiked head at the end of it, and wielded with one hand. They are everywhere: films, museums, "reproduction" weapons shops. They also never existed.