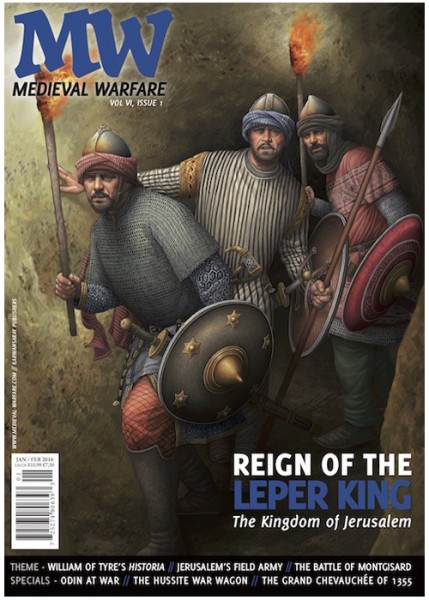 King Amalric of Jerusalem (r. 1163-1174) was the father and predecessor of King Baldwin IV . During his reign, the Middle-Eastwas fractured between multiple kingdoms, states, caliphates, principalities, and counties. The outcome of Amalric's attempts toexpand his kingdom and retinue of supporters against the increasing power of Nur ad-Din, would adversely affect the rule ofBaldwin IV .

Theme: Murray Dahm, "The Historia of William of Tyre - Deeds done beyond the sea"

The Latin Kingdom of Jerusalem based its defense around an intricate chain of fortifications, and its field army. Yet while thesefortifications have become some of the most iconic medieval castles in the world, the Latin field army has fallen into obscurity.Though it lacked both the manpower and resources to ever be entirely self-sufficient militarily, the Latin field army developeda tactical system that was by the standards of contemporary Western Europe, highly innovative.

In this short article, we interview Clive Kelly, a reenactor of the Crusader period and early Middle Ages.

Theme: Gregory J. Liebau, "The Kingdom of Jerusalem and its neighbors - Hostility in the Holy Land"

It would take nearly a century after crusader forces took Jerusalem in 1099 for the city to be recaptured by Saladin.In the meantime, political intrigues, personal enmities, and infighting among the Muslims, would allow the crusaders to gaina foothold in Syria as well. The Franks found themselves thrust into the midst of local disputes and warfare - which theyparticipated in against or alongside their Muslim neighbors.

Theme: William E. Welsh, "The battle of Montgisard, 1177 - A day of terrible slaughter"

Saladin's 26,000-strong army crossed the southern border of the Kingdom of Jerusalem in mid-November 1177 on a large-scale raidmeant to expose the weakness of King Baldwin IV's monarchy. The Ayyubid Sultan of Egypt and Syria had received intelligenceindicating that a significant portion of Baldwin's knights and sergeants had marched north with Count Philip I of Flanders toassist Prince Raymond of Antioch in fighting the Muslims in Syria, and this information served as a catalyst for the raid.

The future king Baldwin IV grew up in his father's court and according to his tutor, the historian William of Tyre, showed greatpromise as a ruler from an early age. He was an excellent horseman, possessed a retentive memory, a keen intellect and was"disposed to follow good advice". Tragically, at the age of nine, he was diagnosed with leprosy, a disease that in theMiddle Ages was interpreted as a mark of God's displeasure.

A Viking warrior dying on the battlefield would have hoped to be amongst those chosen by the descending Valkyries to joinOdin's great army in Valhalla. Soon countless ravens would begin to feast on the dead and the disconnected limbs litteringthe battleground. There would have been those, still alive, who would have believed that they could see a cloaked figure inthe distance carrying a spear and roaming the battlefield, a wanderer. This form was known by many names including: All-Father,Father of the Slain, God of Captives and most notably Odin. Both the god of poetry and occult wisdom, Odin was also the god ofwar and warriors, areas in which he was well-experienced.

A prominent - perhaps even decisive - element of the Hussite Wars (1419-1436) was the Wagenburg or Tabor. When encounteringsuperior enemy forces, the Hussites quickly arranged their wagons to form an enclosed camp from which they unleashed heavy fireon any attacker. While circling or squaring transport wagons to create a defensive position or camp was nothing new, the Hussitesmade this a core element of their military organization and tactics. Special 'war wagons' were designed and built to execute thistactic, and much of the infantry was reorganized to take advantage of this adaptive technology.

Patron saint of wildlife. Guardian of the lepers. Champion of the impoverished. Bearer of the Stigmata. Battle-hardened soldier?All of these traits have been used to describe one of the most prolific characters in Christianity, Saint Francis of Assisi.

"Frightening your enemy is the fundamental and presumably the oldest weapon of war." The historians who penned this quote(Peter Calvocoressi, Guy Wint and John Pritchard) were writing about the mass bombing campaigns of World War Two, the aerialraids of destruction that shared common features with the medieval chevauchée: destruction of the enemy's economic base;attempts to undermine morale; exposing the weakness of the enemy. In the Middle Ages, arguably the most famous practitionerof the chevauchée was Edward the Black Prince, during the Hundred Years War (1337-1453).