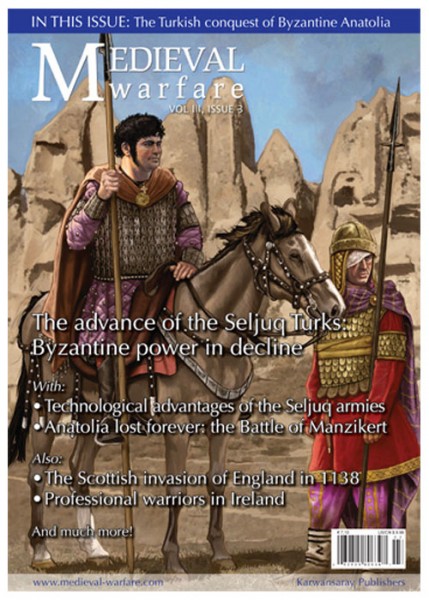 At Basil II's death in 1025, the Byzantine Empire was the strongest it had been in centuries. To the west, the Byzantines had achieved a measure of control over all the land south of the Danube River and east of the Alps. In the east, Byzantine forces had occupied a line stretching south from the Black Sea along the Taurus Mountains, extending briefly into Syria to include the territory around Antioch. Militarily, the empire outmatched any of its contemporaries, with a ready force of nearly a quarter of a million men.

Theme: Lukasz Rózycki, 'The works of Bryennios and Attaleiates - The art of Byzantine historiography'.

The work of every historian depends on good sources. Historians of the Byzantine Empire, both medievalists and antiquity specialists, cannot rely on as many materials as those specializing in modern times. As such, each Byzantine historical source is of great value in providing information. When attempting to recreate the past from such sources, we must bear in mind that each author had different reasons for writing. It might have been to ingratiate himself with the ruler, keep alive the memory of his ancestors, or fulfill a chronicler's duty. Accounting for the motives that guided the authors, their sympathies and antipathies, allows us to identify the unreliable sections of historical texts. The best results can be achieved by analyzing several accounts of a given event.

Theme: Joshua Gilbert, 'The Battle of Dandanaqan - "We won it at Marv and lost it at Marv"'.

The Battle of Dandanaqan, fought in the year 1040 between the Seljuq Turks and the forces of the Ghaznavid Sultanate, is one of the most decisive battles in eastern Islamic history. As a result, the Ghaznavids lost control of Khorasan and their western domains, which became the core of the Great Seljuq Empire.

The roots of Seljuq archery go back to the first millennium BC and the practices of the Scythians, Huns, and other early Asiatic traditions. The horse archers of the Central Asian steppe have used very similar archery equipment and battle tactics throughout the ages. This can sometimes lead to confusion, when contemporary chroniclers had to record the identity of one or other of the tribes.

Caravanserai means a building for housing a caravan. The word 'caravan' derives from karban ('one who protects trade'). To protect themselves against highwaymen, travelling tradesmen would often group together - hence the word 'caravan' that has rooted in European languages for a group of merchants travelling together. The word 'caravanserai', however, was rarely used in the east. The word used in Arabic was khan, which can also stand for a house and a small inn. In Turkish-speaking areas, a caravanserai is called a han. Saray - a Turkic word of Persian origin (sarai) - means a palace or a big house. Thus, caravanserai can be translated as a 'house/palace for caravans'.

It was getting late and his men were tired, having spent most of the day in frustrated pursuit of the wily Turkish horsemen. As the shadows lengthened on the parched plain near the Anatolian city of Manzikert, the Roman Emperor Romanus IV Diogenes considered his options. He could continue the fruitless march to come to grips with the main body of the enemy army, or he could retire back to his camp to try again tomorrow. The approaching dusk and general exhaustion of his troops settled the matter and Romanus ordered that the imperial standard be reversed, a message to his troops to begin an orderly retreat. On that signal, the Roman army began to disintegrate and the Battle of Manzikert, heretofore roughly a draw, would culminate in a catastrophic defeat, resulting in the loss, within a decade, of much of Anatolia, the empire's heartland.

Theme: Stephen Bennett, 'The development of the Byzantine army - The Komnenian response to Seljuq victories'. Illustrated by Julia Lillo.

By the mid to late eleventh century, a combination of internal imperial politics and a new strategic context demanded substantial change to the fiscal and military organization of the Eastern Roman Empire.

After the Byzantine defeat at Manzikert (1071), Constantinople lost control of most of Anatolia to the Rum Seljuqs. Towards the end of the eleventh century, Byzantium resumed an aggressive policy of expansion, reconquering (over decades) territory on various borders of the empire. In 1161, Sultan Kilij Arslan II agreed to a peace treaty favouring Byzantium. The Seljuqs retained control over central Anatolia, but the Sultan accepted pro forma status as a Byzantine vassal. However, this peace was not to last.

The Campaign: Sean McGlynn, 'The Scottish invasion of England in 1138 - A war without quarter'. Illustrated by RU-MOR

For centuries, Anglo-Scottish relations were marked by invasions from south to north and vice versa. Two of the largest Scottish incursions occurred after the Middle Ages: in 1651, a large army marched all the way down to Worcester, before being crushed there by Oliver Cromwell's Republican forces; and, in 1745, the Scottish Jacobite army reached Derby before turning back. However, the medieval period saw the most frequent Scottish invasions of England.

Forged in the crucible of the Viking onslaught and then the Anglo- Norman invasion and conquest, the Irish adapted to the changing mode of warfare that their enemies brought to their shores, by raising professional mercenary armies.