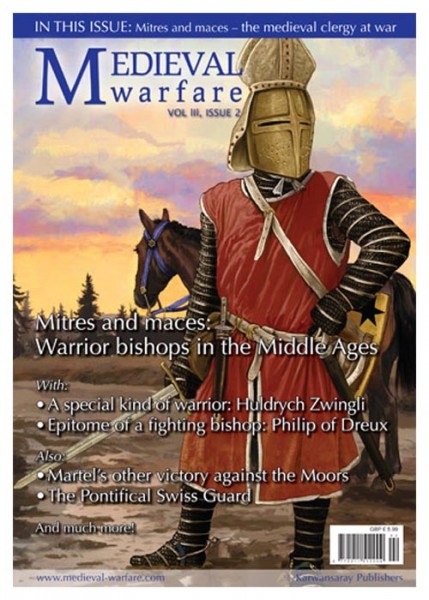 Warrior bishops were present as early as the tenth century, as can be seen by Otto the Great's commitment of his bishops to the German empire for military purposes. When discussing medieval bishops and priests, one envisions saintly individuals in ecclesiastical robes, providing prayer or preaching to their flocks. However, bishops and archbishops could be seen leading their own retinues into battle, sometimes in full armour.

Rogue and regent, conspirator and crusader, priest and strategic planner: Odo, younger half-brother of William the Conqueror, was all this and more. A driving force during the Norman invasion of England, Odo remained William's right-hand man on the island. That is, until Odo's overriding ambition dwarfed even William's wildest aspirations.

Theme: Gregory J. Liebau, 'War and politics during the Italian campaigns - Barbarossa and his bishops'.
Illustrated by Johnny Shumate.

On 29 May 1167, before the walls of Tusculum, a battle occurred between a communal army of Romans, thousands strong, and a small German force sent to remind Pope Alexander III of his temporal allegiance to the Holy Roman Emperor, Frederick Barbarossa. The imperial leaders, ordered to secure the region surrounding Rome for Frederick's arrival, were bishops: Rainald of Dassel, Archbishop of Cologne and Imperial Chancellor, and Christian I, Count of Buch and freshly appointed Archbishop of Mainz. Rainald's men-at-arms, fewer than two hundred in number, had been inside Tusculum waiting for Christian's reinforcements to lift a Roman siege, and when negotiations failed, the imperial soldiers overwhelmed and routed their adversaries, carving Frederick's path to Rome.

Huldrych Zwingli (1484-1531), the Swiss leader of the Reformation, was a man whose life and work marked the transition between the Middle Ages and the early modern period, though his isn't an obvious place among the warrior bishops of the Middle Ages. He was no bishop proper, as the city of Zurich did not have its own bishop, being for historic reasons part of the diocese of Constance. Zwingli's background from neither a noble nor a patrician family would have made his selection unlikely for such a remunerative position, had it existed. Whether he personally shed blood in battle is not known, although he did participate in three battles and died during the last one. The Zwingli Monument, in front of Zurich's Water Church, shows him as a man of the bible and the sword.

Philippe de Dreux (or Philip of Dreux, 1158-1217) was the epitome of the warrior bishop. Ally and cousin of King Philippe II of France, the Bishop of Beauvais was an active opponent of Richard the Lionheart in north-west Europe, both before and after their participation in the Third Crusade. He first campaigned in the Holy Land as part of Henri de Champagne's expedition in 1180, but also joined his brother, Count Robert II de Dreux, for the Albigensian Crusade in 1200. Fighting at his brother's side again at the Battle of Bouvines in 1214, Philippe captured William Longespée, Earl of Salisbury.

The Source: Filippo Donvito, 'The Bishop of Arezzo and the Battle of Campaldino - Dante at War'.
Illustrated by Jose Antonio Gutierrez Lopez.

On a late afternoon in March 1289, Dante Alighieri was walking along a street in Florence with a couple of friends. Suddenly, their attention was drawn by a very strong smell of burning. The men who were laying waste to the fields around Florence were soldiers sent by Guglielmino degli Ubertini, Bishop of Arezzo, "who was a great warrior" (Giovanni Villani, Nuova Cronica VIII.131). At that time, Florence was ruled by the pro-Papal Guelph party, and the only city that threatened its leading position in Tuscany was the Ghibelline city of Arezzo, still loyal to the imperial cause.

Special: Dr. Konstantin Nossov, 'Russian artillery of the fourteenth-sixteenth centuries - The rise of a new combat arm in the east'.

Firearms brought about a revolution in warfare. We still reap the fruits of it: firearms continue their dominant position among all types of weapons. It is due to the mass use of firearms that a transition was made from medieval warfare methods to Renaissance battles.

The Battle: Patrick S. Baker, 'Charles Martel's other great victory over the Moors - The Battle of the River Berre'.
Illustrated by Carlos Garcia.

The conflict between the Muslim Moors of Al-Andalus (modern Spain) and the Christian Franks of Francia (present-day northern France and the Benelux countries) over who would rule western Gaul was inevitable. Both were politically and culturally vigorous, resourceful and driven by territorial and religious ambitions. Furthermore, both sides had sufficient military might to realize those ambitions.

By the time of the invasion of Italy in 1494 by the articulate army of the French monarch, Charles VIII, and the ensuing wars that ruthlessly engulfed the Italian peninsula, Swiss mercenaries had gained an infamous reputation for professionalism that would allow them to win the lucrative contracts. On 22 January 1506, 150 Swiss infantrymen marched through Rome's Porta del Popolo, reaching the Basilica of Saint Peter, where they were jovially welcomed by their new paymaster, Pope Julius II. A relationship that would last over half a millennium began on that fateful cold January day, with the Pontifical Swiss Guard protecting the Pope ever since.