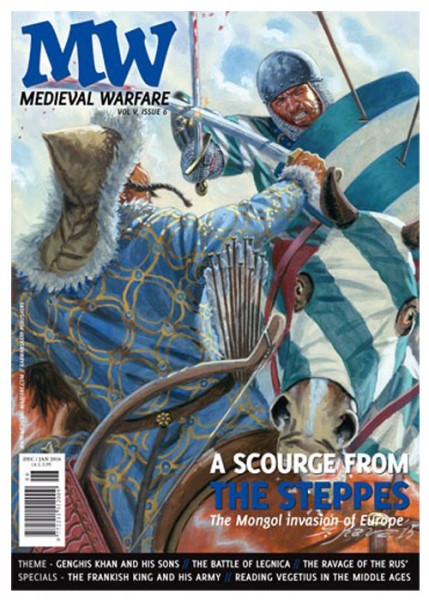 In the 13th century perhaps the most rigidly religious period in the history of the old world, the most world-shattering eventimaginable befell the lands of Islam and Christianity. Out from the East came a wave of destruction and savagery: Genghis Khan and his Mongol warriors had brought the Chinese civilization to heel and would soon thrust death upon thousands of devout Muslims and Christians. Both soldiers and civilians alike would die in the wake of Mongol armies as they pressed on toward the heart of Christendom, undefeated, and seemingly unstoppable.

In December 1241, after the devastating conquest of Russia and the destructive invasions of Hungary and Poland, the Mongols mysteriously (and miraculously) vanished from Europe. To find out the truth behind these terrible and unexpected events, pope Innocent IV organized the first mission to the heart of the Mongol Empire.

Theme: Kurt Hamilton, "Genghis Khan and his sons - All in the family"

While the nations of Europe fought a back and forth struggle against each other, Genghis and his descendants were razing city after city, bringing the largest empires of the time to their knees. It would be under the command of two charismatic Mongols, Batu and Subotai, that Europe would recognize the magnitude of the destruction galloping towards them. These two commanders had great success in their initial push into Europe, but they would withdraw to Mongolia after only five years of campaigning.

Theme: Borja Pelegro, "Weapons & armour of the Mongol warrior - Storm from the steppes"

"They all have to possess the following arms at least: two or three bows, or at least one good one, three large quivers full of arrows, an axe and ropes for hauling engines of war. As for the wealthy, they have swords pointed at the end but sharp only on one side and somewhat curved, and they have a horse with armour; their legs are also covered and they have helmets and cuirasses." Monk Giovanni de Pian del Carpine, who famously visited their capitol in the year 1246, wrote this description of a Mongol warrior's weapons and armour. With the Golden Horde pushing ever westwards, European rulers considered any information concerning the Mongols and their lifestyle invaluable.

Theme: William E. Welsh, "The Mongol devastation of Poland - The Battle of Legnica"

In February 1241, Orda, brother of Batu Kahn, led 10,000 Mongol warriors into Poland, a weak kingdom divided among four quarreling dukes. His mission was to prevent Polish and German forces from marching to the aid of Hungarian King Bela IV , whose realm was the main target of a Mongol invasion of Eastern Europe. After carving a wide swath of destruction through southern Poland, Orda's forces met those of Duke Henry II Pobozny "the Pious" of Silesia in battle near Legnica. Although the Poles initially drove back the Mongols, the fearsome horse archers employed cunning tactics to crush Henry's Polish army.

A new menace appeared in late-12th century Central Asia - the Mongols. Having united all Mongolian tribes, Temujin was renamed Genghis Khan ("The World's Khan") in 1206. At first, neighbouring countries paid no special attention to the event. Soon, however, Genghis Khan's army attacked them, bringing death and devastation.

The Scandinavian medieval age was violent, but it was ruled by laws and strict, almost law-like codes of conduct. One could not strike down a man and think it would go unheeded, but it all depended on who both you and the victim were. How other people saw you meant everything. A man would stand or fall with his honour and reputation. An examination of how the Viking Age's written as well as unwritten laws and conventions functioned, shows that early medieval Scandinavia was not the unruly, barbaric backwater that it is often made out to be.

In 582 AD , the Frankish realm was shattered by civil war when an alliance between Guntram, king of Burgundy, and Childebert, king of Austrasia, came to an end. The Merovingian territories were divided into three kingdoms: Neustria, roughly modern day Normandy, led by King Chilperic; Burgundy, ruled by his brother Guntram; and Austrasia, now the northern part of Western Europe, where their nephew, Childebert was king. Chilperic, king of Neustria, seized the moment to start a war against Guntram as Guntram was now on his own. This information comes to us through the eyes of the medieval bishop, Gregory of Tours, as he wrote it down in his The History of the Franks.

Special: Murray Dahm, "The use of Vegetius in the Middle Ages - Learning from the Romans"

The late Roman military treatise known as the De Re Militari by Flavius Vegetius Renatus was immensely popular in the Medieval period. Although it was not the only Roman treatise known to Medieval writers and commanders, the extent to which ideas can be traced back to this late Roman tract is well worth remembering.