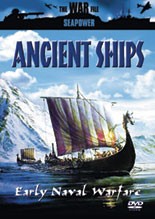 DVD Seapower - From Ancient Times to the Medievel World

The Mediterranean is a sea of historical significance. In ancient times, the civilisations that grew up around it were the most powerful and influential of their age. From Egypt through to Rome, it was Mediterranean nations who led the Western world. Warfare was a vital part of their dominance and naval warfare was perhaps the most important, allowing large armies to move relatively quickly across vast distances. It is no coincidence that the great nations of ancient history were all prolific in the art of war at sea, and some of the battles they fought on water were the most important of their day. In medieval times, the warship would also become a feature of the Northern European world. This is the story of those distant days - the days of the first sea powers.