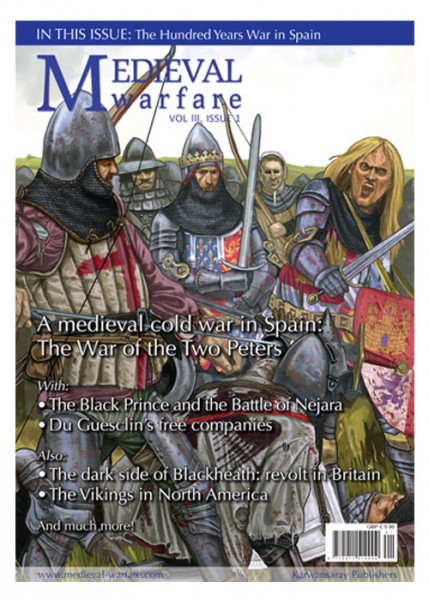 Theme: A medieval cold war in Spain: The War of the Two Peters

Introduction: Owen Rees, 'The War of the Two Pedros'.

If Europe in the thirteenth and fourteenth century was a theatre of war, then France and England were the lead protagonists; they had the best lines and the most time on stage. Other states played only a bit part to the Anglo-French dialogue that still fills medieval history books today. This has led us to ignore the background, the mingling 'extras' who built the atmosphere and allowed the light to shine so brightly on the two starring roles. In this issue, we will be firmly fixated upon the outer wing of the stage, the dark corner that our actors enter only infrequently; but, when they do, the entire stage explodes in activity. We turn our eyes to the Iberian peninsula and a war very few know about. And yet, one of the most famous medieval battles occurred within the frame of this war.

The Ordinances of the Fleets of the Crown of Aragon is a collection of public standards drafted in the time of Peter IV of Aragon (Peter III of Catalonia), around the mid-fourteenth century. The core of this regulatory body is Les Ordinacions sobre lo fet de la mar, written in 1354 by Bernat de Cabrera II, admiral of the fleet, which focused on describing command ranks, weapons and personnel, in an aggressive military doctrine.

Theme: Gareth Williams, 'Siege warfare in the fourteenth century - By hook or by crook'.
Illustrated by Carlos Garcia.

During the early part of his reign and throughout the wars with Aragon (1356-63), Peter I of Castile was willing to undertake a number of sieges. Many proved successful, resulting in the capture of a number of fortresses. How was this achieved? What conventions were observed during a medieval siege in the fourteenth century, and what equipment was available?

From the year 722 until 1492, during what history terms the Reconquista (or 'Recapture'), several Christian kingdoms waged unrelenting warfare to reconquer the Iberian peninsula from the Islamic realms established there, collectively known as Al Andalus. The balance of power shifted among the warring participants in a bewildering fashion. By the mid-thirteenth century, the strategic advantage - and half of the Peninsula - was held by the emerging Christian kingdoms. One reason for their ultimate success during the tumultuous period of the Reconquista was the employment of Spanish light cavalry, the Jinetes, serving multiple roles on and off the war-torn battlefields of medieval Spain and Portugal.

Theme: Stephen Bennett, 'A calamitous victory for the Plantagenet cause - The Black Prince in Spain'.
Illustrated by Jose Antonio Gutierrez Lopez and Jason Juta.

Although it presented a great battlefield victory for Edward, Prince of Wales (later known as the Black Prince), the campaign of 1367 that ended with the Battle of Nájera was to have far-reaching and damaging strategic consequences for England, including the return of Castile and its powerful navy to the Valois cause, the loss of Aquitaine, and the disintegration of the Gran Companye (Great Company). At a tactical level, it is an excellent example of a high medieval English army on the attack, including the use of longbowmen offensively, as well as a demonstration of the Black Prince's tactical brilliance.

The Castilian Civil War ended on 23 March 1369, just outside the Castle of Montiel. Like many events in western Europe at the time, this war was part of the geopolitical fallout of the Hundred Years War. The death of Pedro the Cruel (Peter I of Castile) on that date offers us a dramatic vista of rivalry and betrayal, but would also have a profound influence on the subsequent course of the wider war. Moreover, it was yet another milestone in the career of one of the more colourful participants of this war, a Breton of humble birth, who was to rise to the position of Connétable de France, second-incommand to the King of France: Bertrand du Guesclin, the 'Black Dog of Brocéliande', the 'Eagle of Brittany', and the scourge of the English.

The Siege: Martin Mi?o, 'Inside a siege camp - The siege of Castle Cabrad''.
Illustrated by Rocio Espin.

In 1462, the flag of 'the Brothers' fluttered above a castle set on a cliff overlooking a big curve in a river, snaking its way through a canyon cut deep into the surrounding plateau. Up on the ridge joining the castle cliff with the rest of the plateau, a palisade wall had been built under the flag of the Black Army and the flag of the Royal House of Hungary. King Matthew of Hungary had set up a siege camp at the Castle of ?abra? (Tshabrag) to secure this part of the important route for free passage.

The Revolt: Mike Ingram, 'England's forgotten battles - The dark side of Blackheath'.
Illustrated by Darren Tan.

Blackheath is an area of open high ground just outside the City of London, sitting between the boroughs of Greenwich and Lewisham. However, in medieval times, it was over four miles to the southeast, and from its heights one could look down on London Bridge and the city itself. Across it the Romans built Watling Street (now the A2), their road from Dover to London. It was the meeting place of the ancient hundreds of Blachehedfeld, its name meaning the dark-coloured heathland. It became a favorite place for Lord Mayors of London to greet triumphant kings, such as Henry V after the Agincourt campaign, and for royalty to meet visitors to the country. Its strategic importance was also quickly realized, and Blackheath became the focus and assembly point for many of the battles and rebellions in the city's turbulent history, starting with the Danes in 1013.

A curious passage in the Graenlendinga Saga mentions a battle between some Viking warriors, commanded by Thorfinn Karlsefni, and a certain people called 'Skraelings'. It was fought sometime around the year 1000. It wasn't a conflict with a traditional Norse foe, nor was it fought in well-known Viking territory, but rather it was a clash with native North Americans in a new and unfamiliar land.