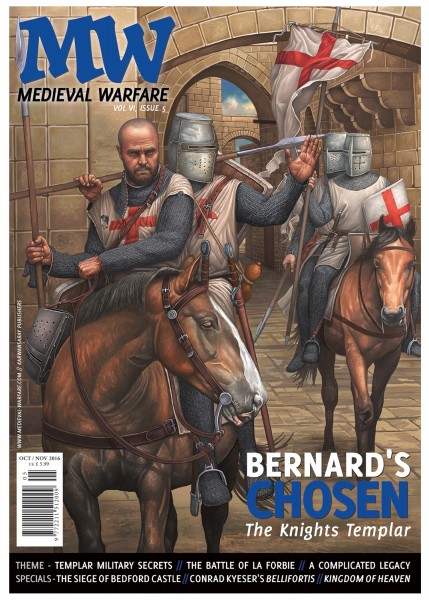 Theme: Peter Konieczny, "Who were the Knights Templar? The rise and fall of a military order"

"We have left our lands and our loved ones, and have come here to raise up and exalt the law of God. So we rest here eating and drinking and spending, without doing any work. We do not perform any deed of arms either, although this country has need of that. We obey a priest, and so we do no labour of arms. Let us take advice, and with our prior's permission we shall make one of us ourmaster, who may lead us in battle when necessary."

Theme: Helen Nicholson, "Why I write about the Templars: None is more illustrious than it is"

Helen Nicholson, one of the leading historians in the world about medieval military orders, tells us about how the Templars fascinated her and what she has learned about them.

Theme: Andrew Holt, "The new knighthood: Bernard of Clairvaux and the Templars"

Andrew Holt tells us about how the French monk Bernard of Clairvaux helped create the Knights Templar, fashioning a new image of the ideal Christian warrior.

Did you know that the Templars once owned Cyprus, or that their rule against women might not have been so strict? Find out some of the strange but true facts about this military order.

"No brother should turn his horse's head towards the back to fight or for anything else, while they are in a squadron." - John Howe writes about how the Templar's Rule prepared them for living the life of a monk, and the life of a warrior.

In October of 1244, the Crusaders and their Muslim allies from Syria set out to fight a new threat - the Khwarazmian menace had descended upon the Holy Land. Working for the Sultan of Egypt, the Khwarazmians had already overrun Jerusalem. Now the fate of the Middle East would be decided at La Forbie.

Theme: Danièle Cybulskie, "The afterlife of the Templars: From fighting injustice to ruling the world"

Heroes. Villains. Saviors. Destroyers. It's hard to think of another organization that has such a widespread reputation of being both good and evil in almost equal measure. In a strange twist of fate, Philip the Fair's defamation and destruction of the Templars in the fourteenth century has given them an afterlife in the popular imagination that has reached all corners of the world, far surpassing the reach of the medieval order. Given the relative brevity of their existence and the fact that they ultimately failed in their mission, what is it about the Templars that has kept us fascinated for centuries?

Special: Owen Rees, "The siege of Bedford Castle in 1224"

The young King Henry III would face his toughest test in the summer of 1224. He would be challenged by the baron Falkes de Breauté, and if Bedford Castle could withstand Henry's siege, all of England might again be plunged in civil war.

Brilliant but strange, Conrad Kyeser created the Bellifortis in the early 15th century. His imagination would produce one of themost unusual treatises of the Middle Ages, creating devious weapons of siege warfare, Brian Price shows us how Kyeser described everything from underwater soldiers to chastity belts.

"Right before the trumpets blast, it is too late for a helmeted man to rue the battle." - Egbert of Liège's collection of proverbs, fables and folktales includes a few gems about medieval warfare.

Ridley Scott's film The Kingdom of Heaven has suffered from accusations of poor casting, poor history and modern agendas which have nothing to do with the history of the time. Murray Dahm takes a closer look at this epic movie.