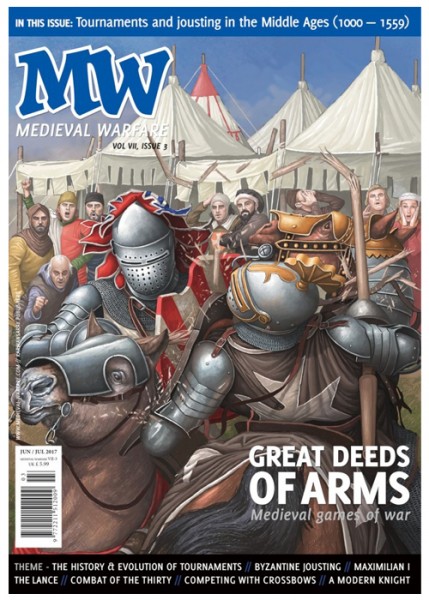 Steven Mulhberger leads our issue that looks at the the rise of tournaments and jousts, from their beginnings as ‘bloodless battles’ to the events which were more theatre than sport. We will be covering tournaments from Byzantium to the Holy Roman Empire, and feature the famous Combat of the Thirty.

Theme: Tournaments and jousting in the Middle Ages

- Steven Muhlberger, 'And the crowd went wild - A short history of tournaments'.
- Tilman G. Moritz, 'Old games and new order - The Tournaments of the Four Lands'.
- Conor Kostick, 'Quintain, dice and young knights - Jousting on the Firs Crusade'.
- Natalie Anderson, 'The Holy Roman Empire: pageantry & violence - Maximilian I, tournament fanatic'.
- Nicola Bergamo, 'He has not abandoned warlik custom - Manuel I Komenos & Byzantine jousting'.
- Danièle Cybulskie, 'A most marvelous deed of arms - The Combat of the Thirty'.
- Jacob Henry Deacon, 'Single combat during the Hundred Years' War - When it wasn't a game'.
- Laura Crombie, 'The Ghent Crossbow Tournament of 1440 - Shooting for prizes and honour'.
- Kay Smith and Ruth R. Brown, 'Their shields are pierced and shattered - The lance'.
- Shane Adams, 'The story of a modern-day knight - Jousting in the 21st century'.
- Murray Dahm, 'Right in everything but the details - Jousting on film'.
- Peter Konieczny, 'No aiming at unprotected parts - Tournament rules'.