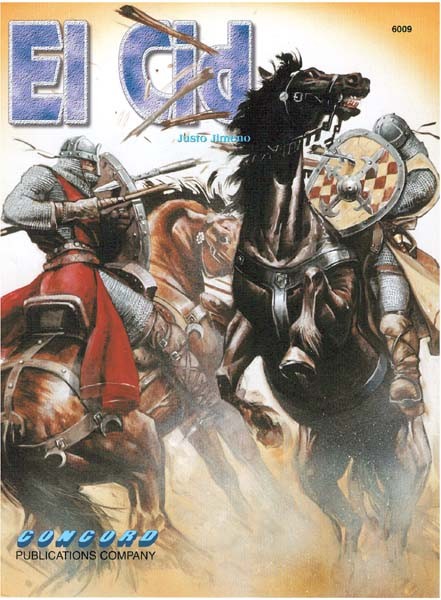 Rodrigo Diaz, the Cid, the great Spanish warrior, was born in 1046. Rodrigo grew

up together with Sancho II who later became King Sancho of Castile. Throughout

his early career, Rodrigo served under King Sancho with distinction. The Cid

helped the king to defeat Alfonso and Garcia, Sancho's brothers, and took over

their kingdoms, Leon and Galicia. Later, the Cid laid a siege to Zamora, the

city of Urraca, sister of Sancho. It was during the siege that Sancho was

assassinated. Alfonso succeeded Sancho as king and the Cid continued his service

under King Alfonso. The Cid helped Alfonso in wars against the Moors and won the

respect of the Spanish people.

However, Alfonso was envy of the Cid's successes and put him in exile. Many armed

men joined the Cid during his exile, and this army fought many battles against

the Muslims. In 1099, the Cid died of battle wounds and his death was a big blow

to the Christian medieval Spain.

Justo Jimeno is a scholar and an artist. This book tracks El Cid from his youth

to his death, supported by well written history and illustrations. Jimeno is a

very gifted artist, and his unique style of illustration is well represented in