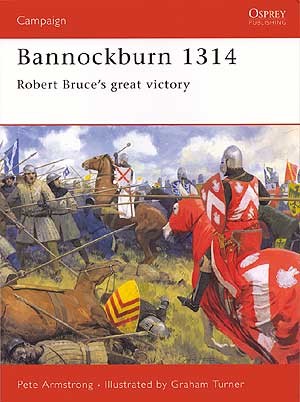 About this book:
Bannockburn was the climax of the career of King Robert the Bruce. In 1307 King Edward I of England, 'The Hammer of the Scots' and nemesis of William Wallace, died and his son, Edward II, was not from the same mould. Idle and apathetic, he allowed the Scots the chance to recover from the grievous punishment inflicted upon them. By 1314 Bruce had captured every major English-held castle bar Stirling and Edward II took an army north to subdue the Scots. Pete Armstrong's account of this pivotal campaign culminates at the decisive battle of Bannockburn that finally won Scotland her independence.

The Authors:
Peter Armstrong was educated at Keswick School in Cumbria after which he spent some time abroad and at sea before taking a degree in Fine Art at Maidstone College of Art. He worked throughout the 1970s as a Secondary School art teacher in Cumbria during which time his fascination with military history and modelmaking led him to produce his first model soldier. More followed and in time a small scale production line was set up to satisfy growing demand. This led to Pete being able to leave full time teaching in the early 1980s to develop his embryonic modelmaking sideline into a full time business. Pete is the sculptor behind Border Miniatures and his books are the fruit of his many years of modelling experience and research.

Graham Turner is a leading historical artist, specialising in the medieval period. He has illustrated numerous titles for Osprey, covering a wide variety of subjects from the dress of the 10th-century armies of the Caliphates, through the action of bloody medieval battles, to the daily life of the British Redcoat of the late 18th century. The son of the illustrator Michael Turner, Graham lives and works in Buckinghamshire, UK.