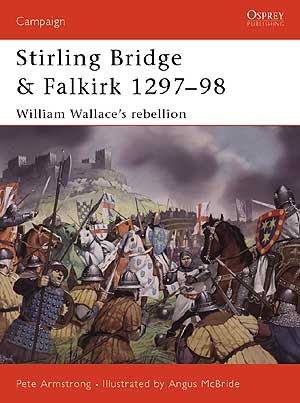 About this book:
The death of the last of the Scottish royal house of Canmore in 1290 triggered a succession crisis. Attempts to undermine Scottish independence by King Edward I of England sparked open rebellion culminating in an English defeat at the hands of William Wallace at Stirling Bridge in 1297. Edward gathered an army, marched north and at Falkirk on 22 July 1298 he brought Wallace's army to battle. Amid accusations of treachery, Wallace's spearmen were slaughtered by Edward's longbowmen, then charged by the English cavalry and almost annihilated. In 1305 Wallace was captured and executed, but the flame of rebellion he had ignited could not be extinguished.

The Authors:
Peter Armstrong was educated at Keswick School in Cumbria after which he spent some time abroad and at sea before taking a degree in Fine Art at Maidstone College of Art. He worked throughout the 1970s as a Secondary School art teacher in Cumbria during which time his fascination with military history and modelmaking led him to produce his first model soldier. More followed and in time a small scale production line was set up to satisfy growing demand. This led to Pete being able to leave full time teaching in the early 1980s to develop his embryonic modelmaking sideline into a full time business. Pete is the sculptor behind Border Miniatures and his books are the fruit of his many years of modelling experience and research.