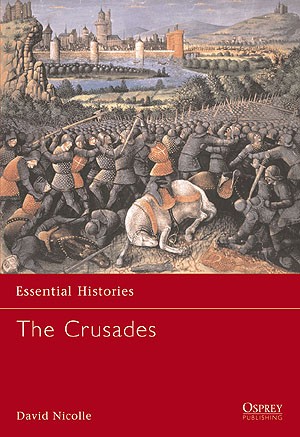 About this book:
Born amid immense suffering and bloodshed, the Kingdom of Jerusalem remained a battlefield for almost 200 years. The Crusades gave rise to the Military Orders of the Templars and Hospitallers, and were a backdrop to the careers of some of history's most famous leaders including Richard 'The Lionheart' and Saladin. On occasion the savagery of the Crusaders left their opponents reeling, creating frictions that survived for more than 700 years. At the same time, as this book lavishly illustrates, art, architecture and learning all benefited from new knowledge the Crusaders brought back from the East.

David Nicolle:
Born in 1944, David Nicolle worked in the BBC's Arabic service for a number of years before gaining an MA from the School of Oriental and African Studies, London, and a doctorate from Edinburgh University. He has written numerous books and articles on medieval and Islamic warfare, and has been a prolific author of Osprey titles for many years.

Contents:
# Introduction
# Chronology
# Background to war: Christendon and Islam in the 11th century
# Warring sides: Byzantines, Turks, Crusaders and Saracens
# Outbreak: The First Crusade
# The fighting: Crusade and jihad
# Portrait of a soldier: Brothers in arms - two crusaders - two fursan
# The world around war: The impact of the Crusades on the Mediterannean and beyond
# Portrait of a civilian: A saint, a lady, a rabbi and a scholar
# How the war ended: The rise of the Mamluks and the fall of the Crusader state
# Conclusion and consequences: The failure of an idea and the rebirth of Islamic expansion