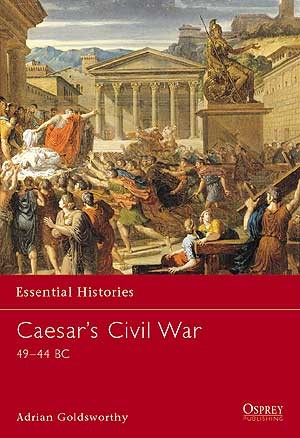 About this book:
Julius Caesar and Pompey the Great were two of the greatest generals Rome had ever produced. Together they had brought vast stretches of territory under Roman dominion. In 49 BC they turned against each other and plunged Rome into civil war. Legion was pitched against legion in a vicious battle for political domination of the vast Roman world. Based on original sources, Adrian Goldsworthy provides a gripping account of this desperate power struggle. The armies were evenly matched but in the end Caesar's genius as a commander and his great good luck brought him victory in 45 BC.

Adrian Goldsworthy read Ancient and Modern History at St John's College, Oxford, remaining there to gain his doctorate in Ancient History. This thesis formed the basis for his first book, The Roman Army at War 100BC- AD 200 (OUP, 1996). His research has focused on aspects of warfare in the Graeco-Roman world and he has written two further books: Roman Warfare (Cassell, 2000) and The Punic Wars (Cassell, 2000).

Contents:
# Introduction
# Chronology
# Background to war: The First Triumvirate
# Warring sides: Legion against legion
# Outbreak: Crossing the Rubicon
# The fighting: Civil War
# Portrait of a soldier : Caesar's centurions
# The world around war: A Mediterranean war
# Portrait of a civilian: Cicero and the Civil War
# How the war ended: The Ides of March
# Conclusion and consequences: Civil Wars and the end of the Republic
# Glossary
# Further Reading
# Index