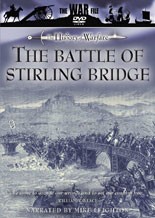 THE BATTLE OF STIRLING BRIDGE

'We come to avenge our wrongs and to set our country free.' WILLIAM WALLACE.
This DVD tells the dramatic story of the great Scottish triumph over the English which took place at Stirling Bridge on September 11th 1297. Their momentous victory confirmed the reputation of William Wallace and made him a national hero, his name has loomed large in the pages of Scottish history ever since. After a short but brutal battle, the English were driven from the land, leaving Edward I swearing a terrible revenge. Battle reconstruction, location footage and expert analysis from leading military historians combine to create an atmospheric and action-packed account of this famous battle in British history.