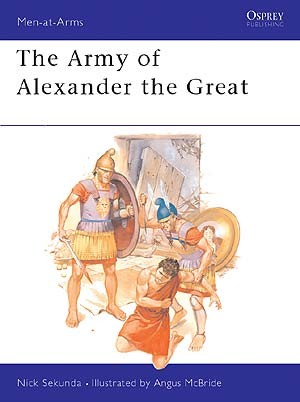 The Army of Alexander the Great
(Men-at-Arms 148)

About this book:
When Philip II ascended the throne in 359 BC, Macedonia was in danger of being engulfed by wild barbarian tribes to the north and wily Greek cities to the south. Philip had to expand the power of the throne or be swallowed up: the creation of a powerful army was imperative. When his son, Alexander, inherited his kingdom at the age of 20, he also inherited an army which was truly unrivalled. The Macedonians were veterans of battle, well equipped and eager for conquest. Add to this Alexander's supreme gifts as military commander and it is little wonder they achieved so much.

Nicholas Sekunda was born in 1953. After studying Ancient History and Archaeology at Manchester University, he went on to take his Ph.D. in 1981. He has taken part in archaeological excavations in Poland, Iran and Greece, participated in a research project on ancient Persian warfare for the British institute of Persian Studies. He has published numerous books and academic articles, and is currently teaching at the Institute of Archaeology and Ethnology in Torun, Poland.

Contents:
# Introduction
# Philip's Army
# The Cavalry
# The Infantry
# The Plates