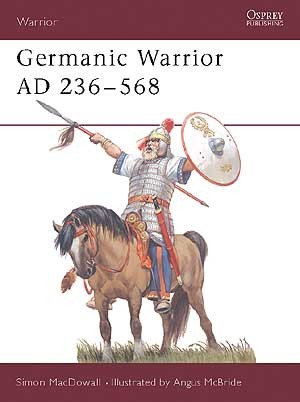 About this book:
The 3rd to the 6th centuries saw the collapse of the classical Mediterranean civilization and the emergence of new states in western Europe based on the Germanic warrior society. This book focuses particularly on the men who made up the retinues of the Germanic warlords who carved kingdoms out of the carcass of the West Roman Empire. Although sources are scarce, Simon MacDowall constructs a convincing picture, using evidence from Roman historians, German archaeology and Anglo-Saxon poetry. The warriors' society, hierarchy, training, equipment, appearance, tactics and style of fighting are all examined, building a comprehensive portrait of the Germanic warrior in this period.

Simon MacDowall is a former army officer with a deep interest in military history, especially the period around the collapse of the Roman Empire in the West. After 22 years in the Canadian army he worked for several years on NATO International Staff and is now a Senior Civil Servant in the British Government. His combination of practical military background with his knowledge and understanding of the later Roman give him a unique perspective on the military aspects of the fascinating era. After living in Canada, Germany and Belgium, and seeing service in Central America, Bosnia and Kosovo, Simon now lives in Oxford England.

Contents:
# Introduction
# Chronology
# The Warrior Society
# Leadership and Hierarchy
# Training
# Equipment and Appearance
# The Warrior on Campaign
# The Experience of Battle
# Glossary
# Bibliography