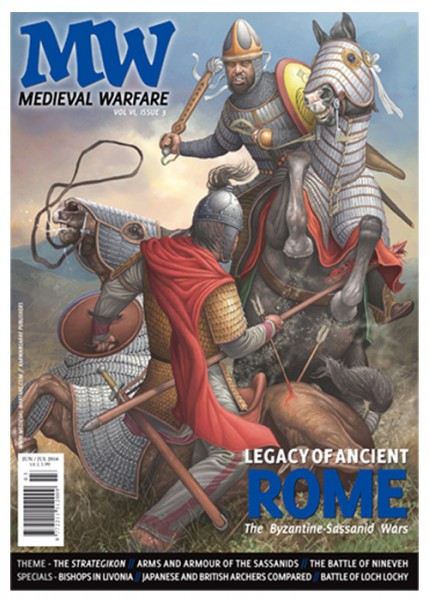 From the ashes of the Parthian Empire, laid waste by Roman legions in AD 224, emerged a more aggressive successor state. The Sasanian kings were as skilled at diplomacy as they were at warfare. In the late fifth century, the Sasanians began a series of protracted wars with the Byzantines along their heavily fortified common border. After a string of limited wars on the frontier, the rivalry exploded into total war.

The source: Murray Dahm, "The Strategikon and the Sassanids - Learning from the enemy"

The Strategikon - a Byzantine military handbook purportedly by the Emperor Maurice (r. 582-602) - offers remarkable insights into the waging of warfare between the Sassanid and Byzantine empires. In Book 11.1, the author of the work distils all that he has observed and learned about how the Sassanids make war. Not only that, he follows this advice on how a commander could go about defeating such an enemy.

The reenactor: Nadeem Ahmad, "Arms and armour of Sasanian Iran - Arming the knights of the Shahs"

The Sasanian dynasty ruled over Iran, much of the Near East, and parts of Central Asia between the mid-third and the mid-seventh centuries AD. They followed on from the Arsacid (Parthian) dynasty and were a conduit for many Central-Asian influences into Iran and Europe. Their influence can be felt even in the modern day as they helped shape the way that nations, states, and courts functioned throughout Asia.

Some claim that Justinian I (r. AD 527-565) was effectively the last of the Roman emperors. It is based on the nature of Justinian's government - the legislation and the desire to impose his rule on the territories lost through the collapse of the Western Roman Empire in AD 476, when Emperor Romulus Augustulus was deposed by the Gothic leader Odoacre (also referred to as Odoacer or Odovacar).

The ancient feud between Romans and Persians reached a climax in the war of 602-628. This war surpassed all earlier Roman-Persianwars in scale and destructiveness. The main cause for the escalation of this war was Khosrow's fanaticism and his unwillingness to make peace in 610. Instead of accepting Heraclius's peace offer, Khosrow decided to exhaust his reserves of wealth and manpower on a (self-)destructive war to destroy Byzantium. What inspired him to make this choice?

After a decade on the defensive against the seemingly unstoppable Sassanids, Byzantine Emperor Heraclius I initiated a counter-offensive in AD 622. Between 624 and 626 he defeated five Persian field armies including one led by Shah Khosrow II himself. Heraclius devastated northern portions of the Sassanid Empire, encouraged his Göktu?rk allies to do the same, and campaigned in the Caucasus to capture or neutralize Persian client states. By 627 he felt ready to launch a decisive blow against his weakened enemy.

The weapon: Owen Rees, "Comparing archers of Japan and Britain"

An examination of two societies, and the archer's position within them, can reveal a great understanding of not only the archer, but also the place of the bow within the warfare of the period. By comparing two different cultures a contrast and exploration can occur as to the different roles that the archer can fill, something which using only one example cannot fully appreciate.

When crusades are mentioned, most people immediately think of the events in the Holy Land, and tend to overlook the events that took place in Northern Europe in the late twelfth and most of the thirteenth centuries. However, those 'Northern Crusades' played a very important part in shaping the history of the entire region.

On 15 July 1544, Hugh Fraser, the third Lord Lovat, marched northwards along the bank of Loch Lochy. The chief of the Frasers wasaccompanied by his son and heir, Simon, the Master of Lovat, and his nephew, Ranald Gallda, claimant to the title of Captain of Clanranald. They were followed by 400 warriors, drawn from the leading gentlemen and able men of Clan Fraser. This host was about to fight one of the most celebrated battles in Highland history.

In our last Movie Knights article, we briefly examined general depictions of King Arthur in film. This time we'll delve into the specifics of several films and examine their depiction of the warfare: especially John Boorman's Excalibur (1981), Monty Python and the Holy Grail (1975), and Knights of the Round Table (1953).