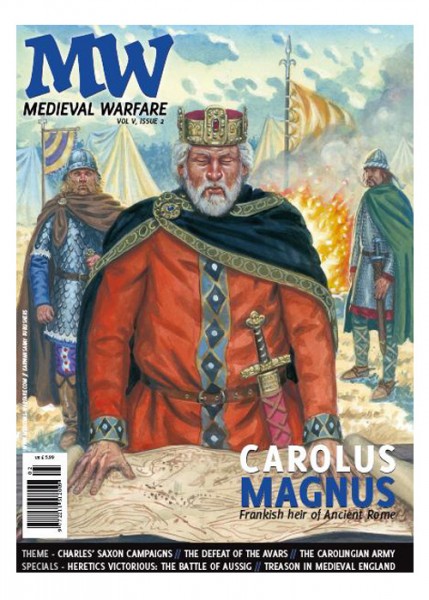 The second issue of the year is one for which we selected the theme ourselves. That doesn't mean that it's one of those less popular themes we sometimes pick because we feel it's time to do so. In fact, we decided to simply pick a topic we were sure would be well-received: Charlemagne has inspired many groups and individuals throughout history. As the first emperor accepted in western Europe after the fall of the western Roman Empire, Charles the Great managed to unify an area which had been fractured and divided for centuries. His reign proved to be an example for his successors. The Ottonians revived the title of Emperor and thus created the Holy Roman Empire, while the western Frankish Empire would form the basis for what would later become France. Perhaps equally important was Charlemagne's role for Christianity, as he managed spread the religion across previously pagan territories, while his Carolingians further promoted art, culture, and intellectual and religious activity within large areas of Europe. In fact, Charlemagne's impact on history can easily be deduced by his sobriquet: 'The Father of Europe'.

Fortunately, for readers of Medieval Warfare at least, Charles' paternity was not accepted without a fight. In fact, Charlemagne spent many of his years as ruler of the Frankish Kingdom (and later as Emperor) fighting one enemy or another, including rebellious fellow-Franks, Lombards in Italy, Muslims in Spain, Saxons in Germany, and Avars in the east. Even the Byzantines were not entirely safe. Thus, unification was only acquired by fire and sword. In this, he was rather similar to most other 'pacifiers' in Antiquity or even the entire Middle Ages; what was exceptional was that he was so utterly successful. In this issue of Medieval Warfare, we're taking you through this period of aggressive expansionism, highlighting some of the more important episodes in the story of Charlemagne the military 'mastermind'. The issue starts with our usual introduction, which discusses the rise of the Franks, and provides an overview of Charlemagne's life. After that, our authors take you through first the Lombard campaigns, then the Saxon Wars, followed by the fight against the Avars. In addition, Charlemagne's cruelty (or lack thereof) is questioned in our Source article, while the success of Carolingian armies is explained in an article which focuses on its organization, tactics and equipment.

If Charles the Great or the Dark Ages is not really your cup of tea, we've got two non-theme articles. The first offers insights into one of the lesser known, but equally crucial episodes of the Hussite Wars: the Battle of Aussig in 1426. In fact, I have to say that this article alone is reason enough to have this issue in your collection. The second non-theme article might not be of interest for the casual armchair general, but if you're looking for gruesome and bloody, the law of treason in medieval England might be right up your alley.