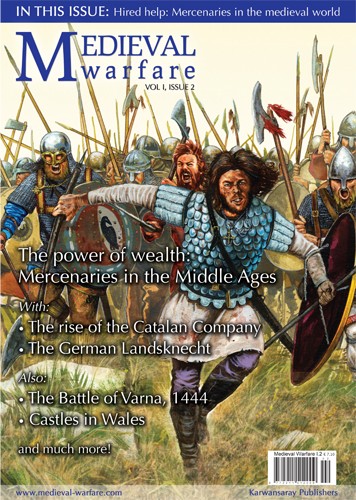 Theme: The power of wealth: Mercenaries in the Middle Ages

Let us descend into the dark abyss, the underbelly, the ever present undercurrentof Medieval Warfare. It is a place oft trodden but seldom explored, a place wherepreconceptions and prejudice run riot, a place where the death of many a man isworth no more than the coins in his purse, a place whence the words for loyaltyand finance become interchangeable. Within this issue we shall elucidate andilluminate the damp, dark world of the alleged snake of the military world:the mercenary.

The Source: Murray Dahm,
'The Chronicles of Jean Froissart - Warfare and Chivalry in the Hundred Years War'.

Jean Froissart's Chronicles is one of the most important sources for the openingperiod of the Hundred Years War (1322-1400). Written between approximately 1369and 1400, the Chronicles contain a treasure trove of details for the militaryhistorian. Once dismissed as romantic nonsense, Froissart is now recognized asa valuable source for historical research.

The transition from Medieval to Renaissance warfare is marked not only by changesin weaponry or fortifications. One major factor is the phasing out of feudallevies in favour of professional military companies. While mercenary infantry hadincreasingly augmented feudal armies during the late Middle Ages, the rise of theGerman Landsknecht formations in the late fifteenth century can be considered amilitary turning point at the end of the Medieval period.

Theme: Arnold Blumberg,
'Monarchs and mercenaries - The use of soldiers for hire by English kings in the High Middle Ages'. Illustrated by Johnny Shumate.

Throughout the medieval period, the struggle between the centralizing tendenciesof English kings and resistance by the nobility to those proclivities wasplayed-out not only in the council chamber, but also on the battlefield. Onestriking factor in the monarch's favor in those ongoing contests with the nation'slanded aristocracy was the employment of mercenaries.

At the end of 9th century, Kônstantinopolis (Constantinople) was the biggest cityof Europe. Its unique position on the Bosphorus, where many trade routes ended orcrossed, allowed trade in grain, furs and slaves from Russia and the Black Sea area.Along these roads came adventurers and warriors from Scandinavia and Russia, whotraced the "road of the Varangians to the Greeks". In Vyzantion (Byzantium), theNorsemen were destined to be remembered primarily as members of the VarangianGuard, which protected the holy Vasiléfs (emperor).

Theme: Vassilis Pergalias,
'The Catalan Company in the East - Defeating Byzantium, the Ottomans and the Franks'. Illustrated by Darren Tan, Andrew Bock and Carlos Garcia.

The late medieval era witnessed a dramatic rise in the use of mercenary soldiers.The feudal system as practiced in Western Europe and the Byzantine military systemof themata gradually deteriorated as effective mechanisms for efficiently creatingarmies. At the same time, the protracted wars throughout Spain, France and Italyproduced a plethora of experienced soldiers. At the end of these wars, suchsoldiers organized themselves in autonomous war bands known as "Free Companies"that travelled throughout the war-torn lands of Europe, collectively selling theirservices to the highest bidder. Probably the most successful and adventurous ofall was the Great Catalan Company.

Like the warriors who wielded them, late medieval Scottish swords were distinctiveand deadly. The cutting power of these weapons was awesome, and some werereckoned better even than the blades of Gaelic legend.

During the late 13th century, King Edward I sanctioned the building of a stringof castles to fortify the North Wales coast. Together they formed an 'Iron Ring'with which to restrain the recalcitrant Welsh. Militarily, these stone behemothswere of limited value as they were often defended by small garrisons. Althoughthese were considered adequate to maintain the castle, they certainly provedinsufficient to protect the adjoining town and its population as later Welshrebellions would clearly reveal. What, then, was the purpose of such an expensivebuilding project in North Wales?

The Battle: Andrei Pogacias,
'The campaign of Varna - An example of how to loose a victory'.
Illustrated by Alina Bondrea

The battle of Varna, romantically called 'The last Crusade', was another importantepisode in the long conflict between the Hungarian Kingdom and the Ottoman Turks.The idea of a crusade started again in Rome after the Council of Florence of 1439,when the Union of Christian Churches had finally been adopted. Apart from thereligious agreement, there was also a military stipulation: the West would provideConstantinople with military help against the Ottomans. Thus, the romantic ideaof a crusade was meant to get as many followers, money and fervour as possible.

Many times, we are asked by enthusiasts of a particular martial culture about thecombat methods or 'martial art style' of some earlier warriors - typically theVikings, Celts, early Scots, Roman gladiators, or Spartans. I'm also askedregularly why we don't bother to 'study' or 'practice' those fighting skills.Aside from the fact that our specific area of interest is the 14th to 17thcenturies of Western Europe, there is a much deeper issue involved.
Weiterführende Links zu "Medieval warfare Vol I - 2 - The power of wealth"
Bewertungen 0
Bewertungen lesen, schreiben und diskutieren mehr
Menü schließen