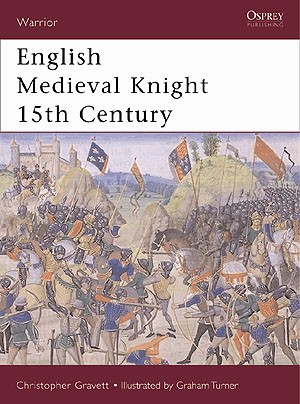 The 15th century was a time of change for knighthood. Knights no longer fought for their lords in return for land, since the feudal summons had long before given way to a system of contracts. Moreover, many knights now preferred the role of landowner, man-about-town or parliamentary representative. However, this was also the age of the knight in plate armour, of the battle of Agincourt and the conquests of Henry V, and of the Wars of the Roses, the bloody internecine struggle that tore medieval England apart. In this title Christopher Gravett describes the life of a 15th century knight, his equipment and experiences from his earliest days as a squire through to his experiences on the battlefields of England and France.

The Authors:
Chris Gravett is a former Senior Curator at the Royal Armouries, Tower of London, and a recognised authority on the arms, armour and warfare of the medieval world. He has worked as an advisor for numerous TV and film productions, and has written many books for Osprey.
Graham Turner is a leading historical artist, specialising in the medieval period. He has illustrated numerous titles for Osprey, covering a wide variety of subjects from the dress of the 10th-century armies of the Caliphates, through the action of bloody medieval battles, to the daily life of the British Redcoat of the late 18th century.