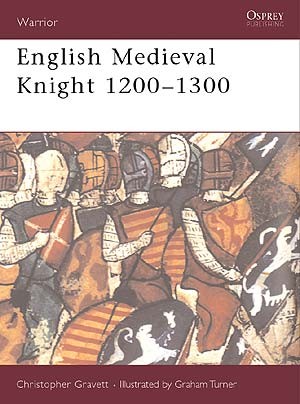 The 13th century was a time of change for knights in England. They were faced with rising costs and increasing demands on their time for local government because of their very status in society, until knighthood itself was sometimes avoided. This period saw as well the development of the tournament from the wild team events of the early years of the century to the single jousts with blunt lance. Campaign life in the 13th century also embraced several theatres of war including the baronial revolt against King John, the Barons' Wars of Simon de Montfort, and the Welsh and Scottish wars of Edward I. This title also covers the use and development of arms, armour, costume and other equipment.

The Authors:
Chris Gravett is a former Senior Curator at the Royal Armouries, Tower of London, and a recognised authority on the arms, armour and warfare of the medieval world. He has worked as an advisor for numerous TV and film productions, and has written many books for Osprey.
Graham Turner is a leading historical artist, specialising in the medieval period. He has illustrated numerous titles for Osprey, covering a wide variety of subjects from the dress of the 10th-century armies of the Caliphates, through the action of bloody medieval battles, to the daily life of the British Redcoat of the late 18th century.